01/10/2009
...are back.
Due to lazyness, I held back most of the pictures I took in the back end of the summer but I finally got round to sending them off for processing last weekend.

I have made several trips over to see Dave Tolcher in Robin Hoods Bay over the last few weeks and over the next few days I will post up the images.

The following two images are from the Sunday morning of a trip a few weeks ago. We had gone in search of rowans and mountain ash trees which have been quite spectacular this year. Dave took me to a part of the Moors I had not visited before and as we were walking quite casually mentioned a waterfall that he hadn't got round to taking me to before that was quite good.

Quite good was an understatement; it was a superb place. As usual we lost the original plot completely and both of us got absorbed in the potential of the place.

My first image was one of those that screamed out at me the moment I arrived. It has a 'magical', almost hypnotic or addictive quality to the composition that I look in my image making. 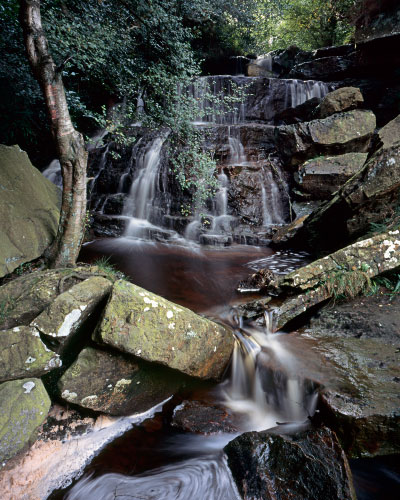 The second image was a detail of the falls, for which I paid a heavy price. Setup in the middle of the stream, my Linhof viewer fell in. What was worse, a week later it had not dried out and had started to mould up. It is currently with Paula at Linhof Studios (along with my spare TK) being serviced so I'm hoping to goodness it will be ready soon for the main Autumn period; I feel helpless without it. 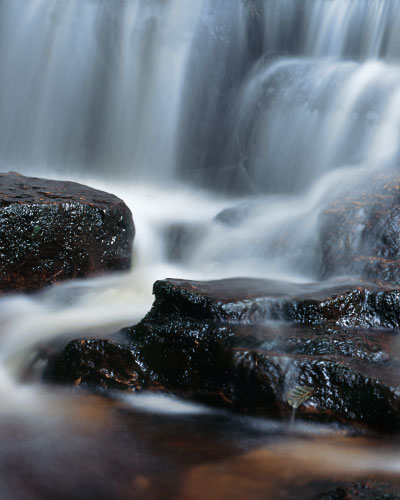 
As an aside I recently downloaded Tim Parkin's Velvia and Provia profiles for the V700/V750 scanners. They work great. A big thanks to Tim once again! If you haven't seen his website, go check it out.
Berries, Ravenscar and Football
Garlic
Next
Previous