21/11/2009
First set of pictures from the ALF workshop
My pictures are back from the Large Format Workshop in the Lakes a couple of weeks ago. Overall, more images 'got away' from me then I would have liked but as I posted last time, such trips are much more about the inspiration, learning and company then the actual photography.

Arriving just after lunch on the monday, I walked round the edge of Buttermere before the workshop began and made an image of a fabulous dry stone wall in the fading light. I was particularly attracted by a diagonal stone wedged in the wall.

Blue light above and in the shade on Velvia with a subject that needed warm light, I knew that the colour cast would be too cold. A couple of years ago, I would have been carrying a 81 series filter to warm it up. No longer. In the rare instances I would have used such a filter, nowadays I tend to leave such colour temperature correction to the scanning stage. The result was this image. 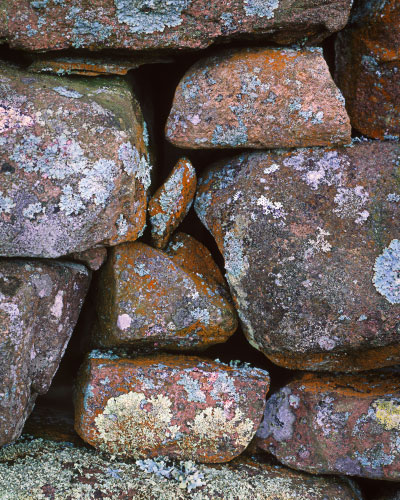 
The first day was very satisfactory and the group made what must be a record number of compositions, with most people averaging 4-5. That is quite a lot for large format photographers!

We had very still, overcast conditions which was perfect for detail work and the whole day was spent at one location in Borrowdale. My first couple of images were made at an interesting (but very difficult to photograph) quarry.

Despite the fabulous colours in the quarry, the first idea that struck me was the superb trees at the top of the quarry and I made this image with my 450 lens. I loved the shape of the quarry top. 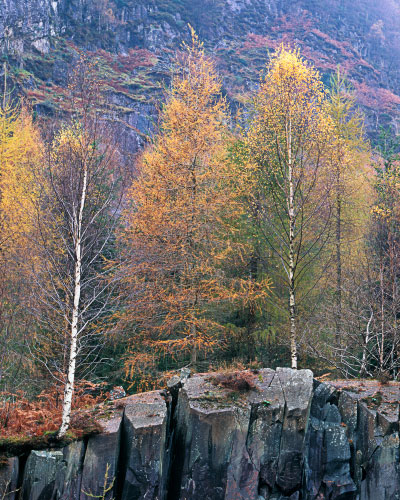 
The quarry was at first sight a fabulous location, but proved to be much harder to make a satisfactory image then one might have imagined at first glance. I climbed down into the quarry and had a go at an image from the base in a very chaotic landscape.

Overall, the trees were probably a week or so too late and my attempt to simplify the composition didn't really work. Still too complex... 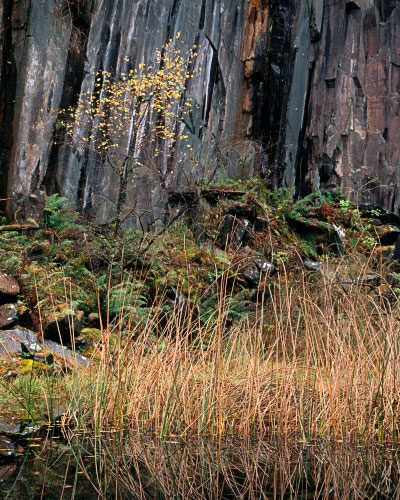 
Having scouted the general area before I shot the quarry images, I had noticed a fantastic wall on a slight rise and some superb mossy boulders.

I have always had a soft spot for mossy stones (there are loads of superb ones near the edge of Buttermere) but I have never managed to find a decent composition incorporating them. However, here I couldn't resist and I made this image just before lunch, my favourite image of the day.

I can't say I had expected to make an image with a 90mm lens in such conditions, but photography can be surprising. The main challenge was to get the tripod setup high enough to include enough of the mossy rocks. It was a case of jumping up and down to focus again which must have looked ridiculous to the uninitiated! The other thing I did was use the rear standard to widen out the base of the image and narrow the top to help balance the foreground and background elements.

With no time pressure other than a hungry tum, it was simply an enjoyable image to make. It is for times like this that we learn the craft of view camera photography. Shooting such an image on 35mm digital would not have been anything like as pleasurable for me. 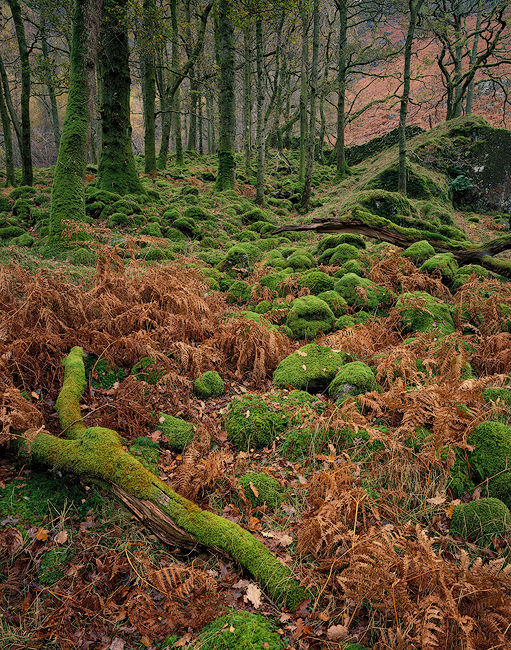 
I followed this one up with an image after lunch where I messed up the exposure quite badly. This happened two or three times over the week which is a little concerning as I normally trust my metering. Something I am going to have to watch.

Dave and I walked further up the hill to scout some more images and I made a couple of G10 test shots which really needed different light. I will return to these in the right conditions.

All in all, it was a fabulous and relaxing day of photography and perfect for a first day of a workshop. The coffee at the tea shop in Grange really hit the spot and it is an area I will certainly return to.
Lake District ALF Part 2
Back from the Lakes
Next
Previous