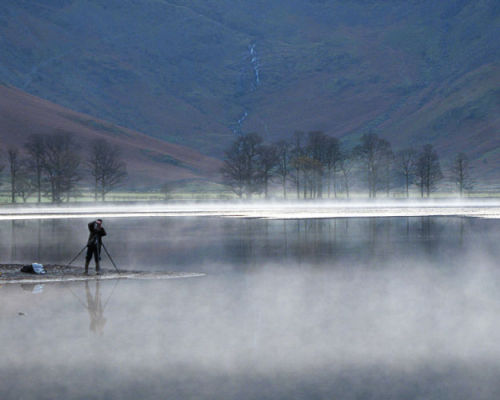 
We awoke to a fabulous still and misty dawn on Wednesday morning and in the dark we stumbled around the edge of Buttermere ready for first light.

The G10 snap above (I think it was Nick on the end of the peninsular) gives some idea of how atmospheric it was pre dawn. These were conditions that I should have made a much better image but as sometimes happens on these occasions I got fixated on a particular image that in retrospect was far too forced and not suited to the conditions. It sometimes happens. Ho hum.

However as the light rose, I did manage a second image that comes much closer to capturing the atmosphere and quality of the reflections, mist and light.

My main issue with the image was not shooting it on Provia; as the sun came up I didn't pay enough attention to how contrasty it was becoming. Without thinking I chose a point that was between the shadows and the sunlit area to expose. The result was over exposed brighter points. It is not the kind of trannie I would aspire to on the lightbox, as the dynamic range was rather too much for Velvia to cope with and it is not close to being tonally balanced. However as for scanning, it was a pretty good 'digital negative'. All the shadow areas are well exposed and I was able to balance out the contrast somewhat in post processing. 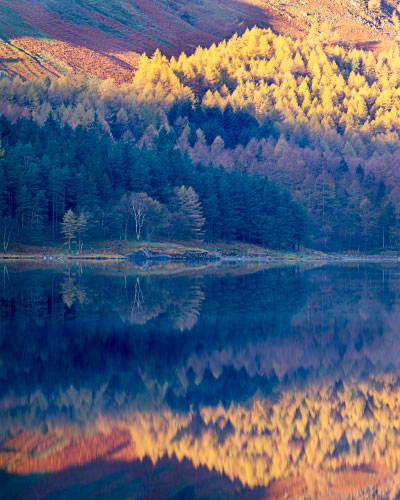 Once the sun came up on the near side of the lake, the quality of light was gone and it was time for breakfast.

The weather forecast indicated that today would be likely to be our best bet for Wastwater so the group set off for the long drive around. (The energetic amongst us could have nipped up Scarth gap and over Haystacks and saved an hour of driving!)

The first target at Wastwater was a climb some of the way up Kirk Fell. It is a route I have always avoided after reading Wainwrights description of it as the steepest ascent in the Lake District: "a relentless and unremitting treadmill". He drew a picture of a fell walker labouring up a more than 45 degree slope which he captioned "Looking backwards (between one's legs) there is a superb upside down view of Wasdale Head."

Well it wasn't long before I was looking at an upside down view of Wasdale head on my ground glass as I made this image: 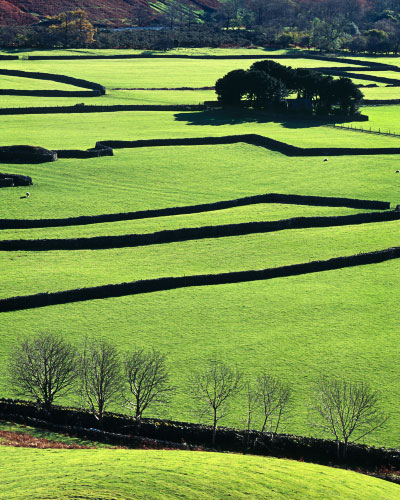 
Unfortunately it suffered from two main faults: not going high enough (thank you Mr Wainwright) and not reshooting it about an hour later when the sunlight became more dappled. (There is a reason which we will come to.) Another image that goes into the 'just escaped' category.

Having climbed up to Pillar a few times, I thought I would check out the valley just round the corner from Kirk Fell. I remembered walking through it to start the ascent to Pillar and from what I remembered it was in shade during the morning (and that particular day it was very frosty too).

As I walked round I immediately saw this opportunity and I tried an image more as an experiment then anything else to see how the gleam of light would contrast with the cold shaded area on Velvia. This was the image of the week that most surprised me. 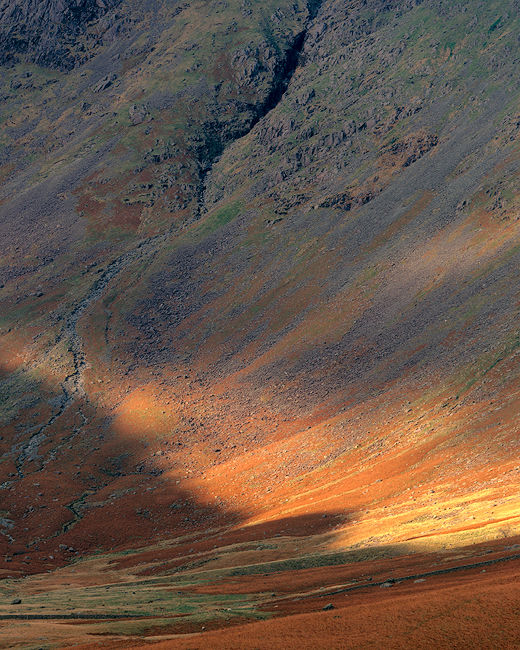 
Walking back to where I had previously been setup, I saw David Ward making what looked (when I glanced under his dark cloth at the ground glass) suspiciously like yet another b*st*rd. David did, however, show me how to setup the L&L darkcloth for the TK rather then an Ebony, which once I got the hang of it is a big improvement.

The light was turning magnificent and I toyed with re-setting up the earlier image but then considered the possibility of a shot up to Great Gable. I noticed a nice wall configuration leading up to the top and setup with my trusty 240. I waited patiently for the light. After 20 minutes or so the light was painted wonderfully (alternate dark and bright dappled light right to the summit) and I clicked. That should have been the image of the day, if not the trip. And it still is in my minds eye.

However I'll never know as an hour later I accidently reloaded it into my camera again and shot an image from the Lake looking back up to Kirk Fell. Double exposed and no B. Very surreal but not what I had wanted!

For the record the final image I made was as follows, though I find it difficult to like it under the circumstances. 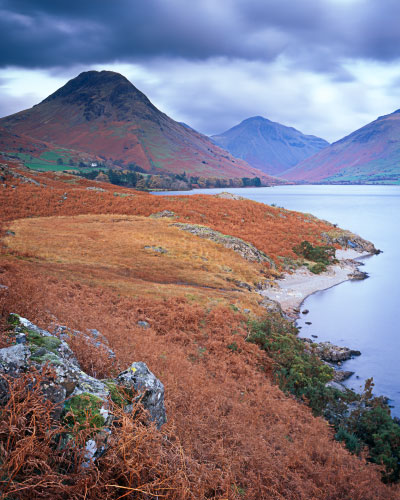 
With the weather turning very cold and windy, with no prospect of further light and devastated at how I had messed up what is normally a very tight film management workflow, I packed up. Too early as it turned out. To add insult to injury, in the last two minutes before the sun came down, the mountain tops and low clouds lit up bright red. I could do no more than woft my G10 at it. C'est la vie.
Lake District ALF Part 3
Lake District ALF Part 1
Next
Previous