Skipwith Common and the Ings

My photography was not all that great, but nevertheless it was an enjoyable outing trying to come to terms with photographing some local places.

I had watched the weather forecast which showed a warm front passing through over night/early morning. Knowing that a clearing front often produces interesting lighting conditions, I set out about an hour or so before the rain was due to stop (according to the Met office's forecast).

Sure enough, the rain stopped right on cue and I was able to setup before the front cleared out. For a while the quality of light was superb despite it being the middle of the day and the rain had darkened the grasses wonderfully.

Skipwith is an area of Ancient Heathland that is gradually being restored and the area I photographed has some really interesting old tree stumps from where the trees have been cleared. I managed this image and scouted out a number of other interesting detail images that I will return to (once the light came up, it became too bright to manage them). 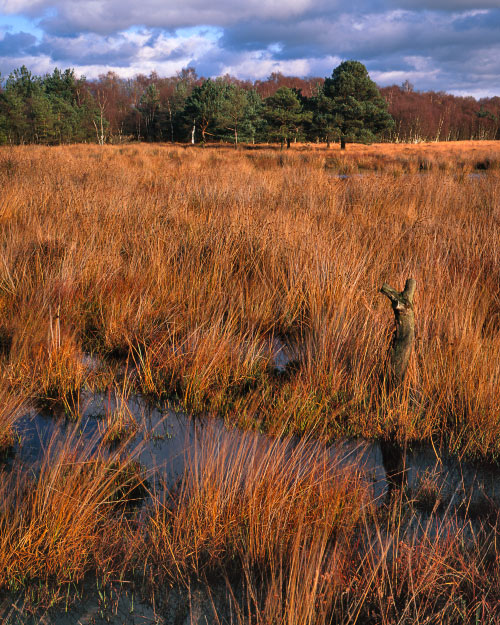 
After making this image, the clouds cleared out completely and I went to investigate the woods in an area I knew was quite interesting from previous walks. Skipwith has recently had a fairly comprehensive drainage systems installed to counteract the standing water caused by mining subsidence and a number of areas that were frankly impassable before have opened up and become really interesting from a photography point of view.

I surprised myself and didn't shoot a detail image in the shade but decided to make this rather over ambitious shot (ambitious given the strong lighting - too much contrast - and the complexity.) 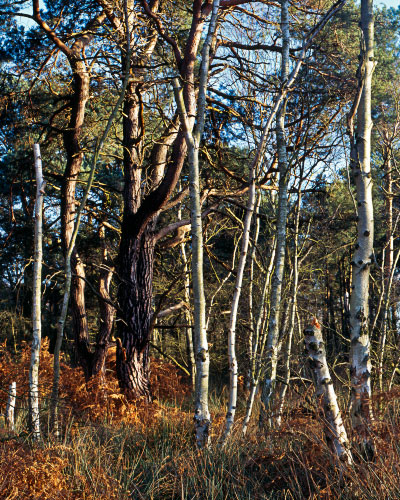 
I made a second simpler image that suffered from overexposure but as I have retained a B image I will try asking the lab to adjust the exposure during processing.

As it was heading towards sunset I decided to drive round to Bubwith and have a go at the Ings.

The Ings are a fabulous sight at this time of the year when they are in full flood. 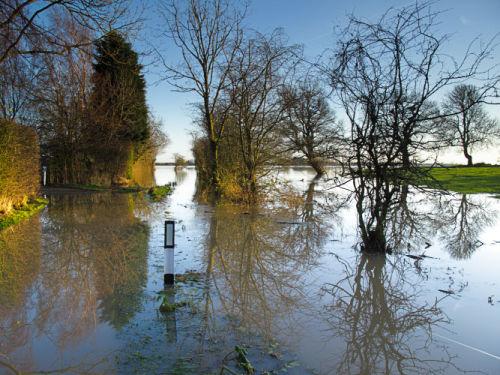 
They form part of the 'Lower Derwent Valley' Nature Reserve which is home to many thousands of Geese, Swans and other birds during the Winter. I can see the Ings from my bedroom window and when there is a misty dawn, the view is quite spectacular. The snap shot above is of the Ings at my home village, close to where the Pocklinton Canal and the River Derwent join. In full flood, the Ings must be 1/2 a mile across and 6 or 7 miles long from Weldrake to Bubwith. Access is difficult and there are very few places you can get down directly onto the Ings - quite rightly in order to protect the birds. But there are a couple of places where some limited access is possible.

I got distracted at one such place before my intended final location and made an LF image that suffered from location failure, subject failure, light failure, composition failure, wind failure and photographer failure. Not every day you get to tick all of these! The less said about it the better.

As a result of the distraction, I arrived a little too late to setup the Large Format Camera for my intended image and although I did shoot it with the G10, that picture can wait for another day. However I did have a bit of digi snapping fun playing with my new 3 stop grad for the G10 at sunset. 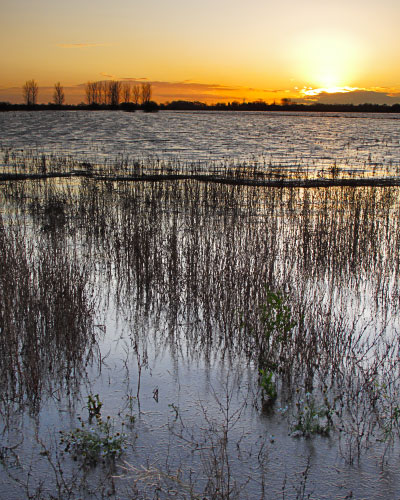 
I have scouted out a few areas now along the Ings that interest me and I will hopefully try out a couple of LF images over the next few weeks. I have also been to Skipwith a few times now and I am beginning to like it as a location. Assuming the conditions are right this weekend, I'll probably try another session there.

The conclusion: a fun trip and although not really all that successful I see it as another step towards making a few more local images. These are not easy locations to work and I think it will take time to work out how to make successful images there (like I had to work out the wolds). To start with it is completely flat. I'm of the opinion that working these locations until I get some stronger images from them will help to develop my own photography.
Thorganby
Latest Viewpoints Article
Next
Previous