An Early Christmas Present from Postie 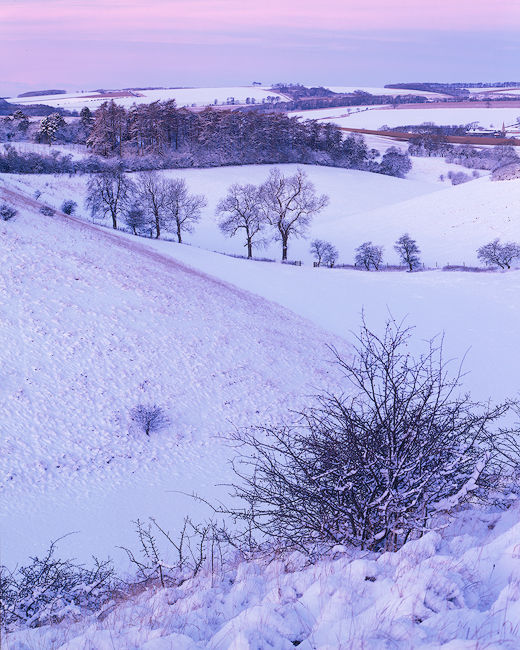 
My LF pictures are back from my trip out to the wolds last Sunday morning. I picked Paul Moon up from his home in Nunbernholme and we drove up onto the hills above his village and walked down into Great Dugdale. The conditions were wonderful. The grasses were superb in the snow and the view down to Warter Village is stunning. I made the above image pre dawn and it was the fist image I exposed. As is usual, I made a few more images as the light changed and a gorgeous pink finally appeared in the sky.

However, it was this image I prefer to all the others. There is a wonderful subtle quality to the light over the hills that a pink sky seems to detract from, almost compete with. It is interesting to see how my vision has changed over the last couple of years. I think two years ago I would have scanned the pink image and completely missed the subtlety and quality of this image. Photographs don't have to shout to be heard.

After the sun came up, vistas became unattractive as it was almost cloudless and we dropped down into the valley to the other side. I setup a composition of some grasses in the knowledge the low sun was starting to rake over the snow and made an image on Provia.

I packed up and was ready to move on when it became clear that the light over the snow was getting better and better. To Paul's credit he didn't mind me re-setting up and he helped out by shading my lens from the sun - I was shooting with the sun at 2pm. 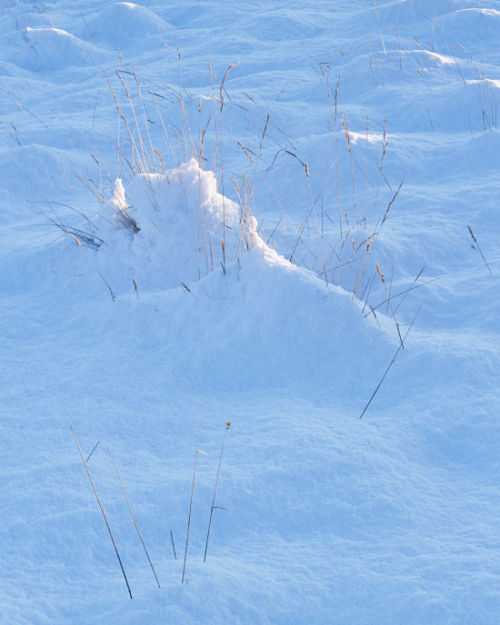 
Thereafter the sunlight became quite strong. We moved on to another valley which has loads of potential but I find the light too stark to be satisfied with the two LF compositions I made. I setup another detail image of some shadows in a field but it proved almost impossible to make on LF as the sun kept moving and destroying the composition. And similarly for my final image of the power lines on the tops, I could not best my digital image as the LF image is almost identical but has lost the fabulous cloud configuration.

All in all, one of the best trips out in the snow I have done. Superb.

A Merry Christmas to all who know me and a happy and prosperous New Year.
New Years Resolution
Fuji to stop manufacture of QuickLoad film
Next
Previous