Skipwith in the snow 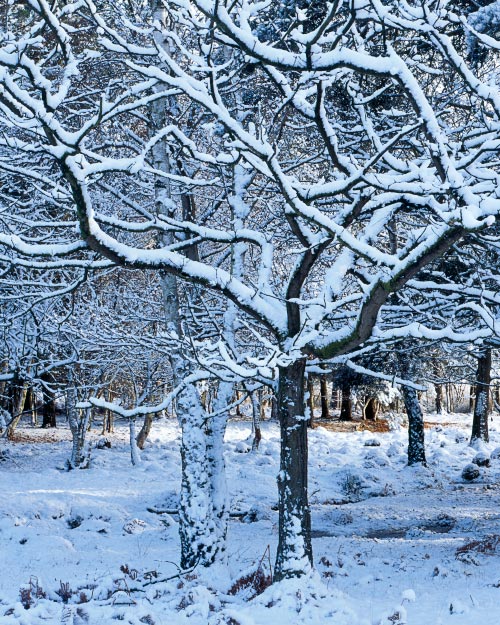 
My second outing to Skipwith over the Christams/New Year period came very early in the New Year. I had driven back from visiting the family in Kenilworth (via a short detour to the Peak District! More on that to come) and just as I reached Goole it began to snow like crazy. The last 20 miles took me nearly an hour the roads were that slippery and visibility was so limited.

The following morning was like a winter wonderland and I decided to devote the day to Skipwith. Dave Tolcher said that he was driving back from Robin Hoods Bay that day and the trees between Malton and York were stunning. I know which ones he means in particular and next time it snows I will try a trip out. However, they were pretty good here too and I spent a magnificent day here pottering around my playground.

I made five large format compositions and I do have to admit that it was probably one or two too many. I let my quality slip a little during the middle of the day. I think I was rather too excited to see Skipwith in such pristine conditions and was determined to make LF images. The middle couple of images ended up being documentary fodder rather than the quality of image I am aspiring to.

The main image above was the first LF image I made and definitely the best. I love the lighting which has created a three dimensional feel to the image. There is a lesson I am beginning to learn about snow and the importance of light. But then hey why should snow be different from any other conditions?

The final image I made that day was one that also demonstrates to me how the most subtlest of light can make a difference. It was made close to dusk and I noticed just the slightest break of light in the clouds. I had been examining the potential of this tree from several angles and when I noticed the skyline, I came up with this idea. I decided to trust provia to hold enough detail and metered for the highlight in the cloud gap. 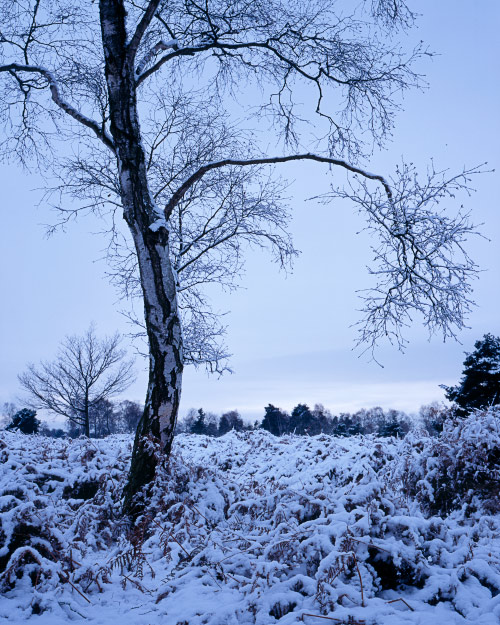 
I like the composition and the detail in the trannie of the snow on the tree is gorgeous.

Skipwith is flat. To make vista like compositions work I will have to develop some different approaches from some of the traditional ways of interpreting the landscape I might adopt. That is one of the reasons I am photographing there.

The other three images I made that day are fine but lack the quality of composition and/or light of these two images. No doubt when I look at them again in a couple of weeks time I might change my mind.

I went back again early the following morning. The snow had turned from that first pristine few hours to a dull, tatty covering and I wasn't inspired to shoot anything. Its been great having proper winter conditions again, but I'm also slightly pleased we have a mild patch of weather coming through. It will be nice to see things on the ground again.
Peak District Scouting
Skipwith in the wind
Next
Previous