A weekend in Hathersage 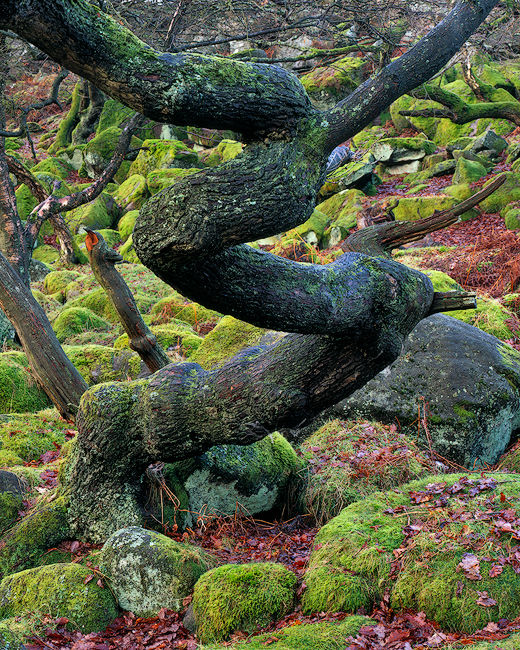 
A couple of weeks ago I spent a weekend photographing in the Peak District with work colleague Julian Ashley. Julian had promised to introduce me to an area he knows well. It is also an area that is fairly accessible for me, being approximately an hour and a half away in the car.

I don't know the Peak District well, never having visited in my hill walking days (the lure of the high mountains of the other national parks causing me to overlook it). It is certainly popular however. I read somewhere that more than 60% of the UK population live within an hour of the park. I'm not sure if this is true but as an area to photograph it has certainly grabbed my attention.

Julian suggested a good introduction would be to base ourselves in the Hathersage/Castleton area (the Hope Valley). The Saturday was spent at Padley Gorge. We walked down from the Surprise View car park (don't ask me which view is the surprise) into the Gorge. Almost immediately, we found the most amazing oak forest. The trees were stunning and we spent a large portion of the morning working this area.

The biggest challenge was the sheer complexity and density of trees. The trees were individually fantastic but almost impossible to isolate and simplify - to make some order out of the chaos.

It such situations there are usually two approaches. One is to render the background completely 'out of focus' through using a shallow depth of field and/or using the large format camera movements. As an approach to Landscape photography, it has never really appealed all that much to me apart from when used to isolate smaller details. It does have the advantage of removing the subject from it's context and whilst in other situations that might be a very good interpretation, I thought that here the context was critical to making an image work for me.

The alternative approach is to find a composition were the background elements complement the subject and resolve themselves. I worked the area for some time before coming up with the composition above. I am really pleased with it and I can't wait to print it large. It is one of those images that the longer I look at it the more balanced it seems to be.

We walked further down the gorge but I couldn't find a second composition that appealed to me, despite setting up a couple of times. On both occasions I packed up before making an image. The light had got up now, adding contrast to the complexity and density.

We stopped for a bite of lunch and as I was eating I noticed a branch over the river. It was side lit and the potential for this image came to me. 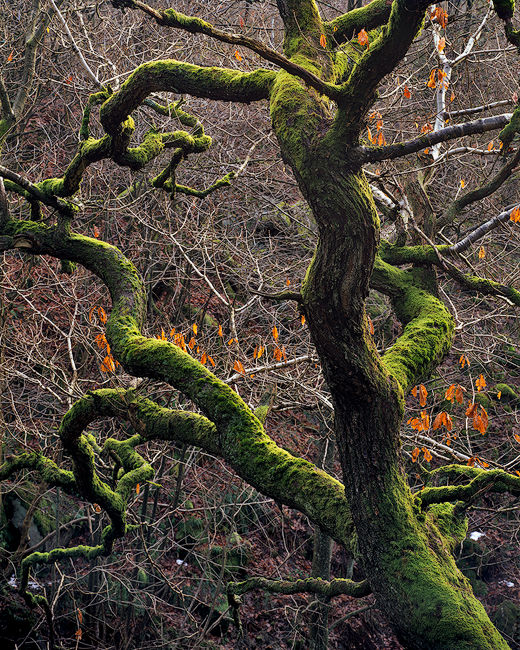 'Branch Over the River'


I really like it as a composition and the light is good, but it has a few technical issues that mean I will probably look to re-shoot it in the very near future.

In the afternoon we met up with Tim Parkin and Dav Thomas. Julian and I had walked up onto Millstone edge but as we did so, the light went (pretty much for the rest of the day). Nevertheless, we setup just in case and it was a great opportunity to catch up and natter with Tim whilst the light faded.

The evening was spent having an excellent Indian meal in Hathersage (the proximity of a decent Indian being the top criteria for the selection of photographic location - it is important to get priorities right). The following day was overcast and we decided to spend the day in a nearby millstone quarry. Julian made an excellent image at the top of the quarry but despite working the area for most of the day, I was not really happy with any of my images. The place put me in mind of a millstone graveyard and I was trying to find an image that represented that concept - but it was only very late on when the light had faded that I found a composition that really worked for me. It was too late to make the image work on 5x4.

The image below is one attempt I made to show how the moss was gradually beginning to cover the stones. 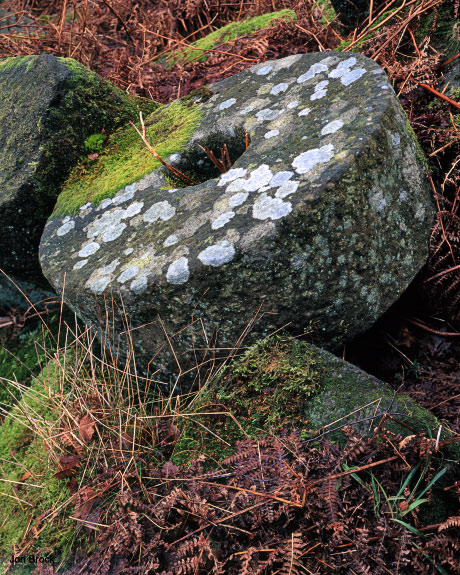 
An excellent weekend and one that will see me definitely returning to the area soon.
Back from Glencoe
Fen Bog
Next
Previous