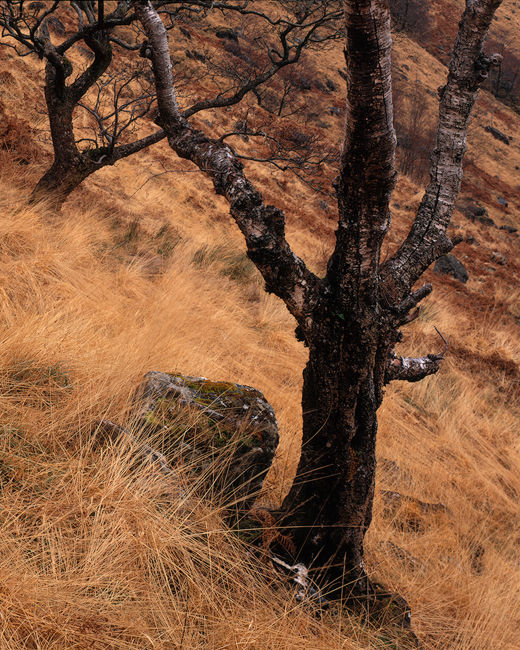 
This image was made in Glen Nevis on the Friday.

The weather on Thursday morning did not give me an opportunity to reshoot the Buc at dawn so we headed straight for an early breakfast. We were now the only ones in the hotel, apart from a lone Austrian snowboarder. For breakfast we were moved into the lounge (with its magnificent view over the Buc) and the breakfast entertainment was provided by said guest trying to get out of the car park up the hill to the main road. He was driving an M series BMW with low profile tires which, wheels spinning like crazy, couldn’t get up the hill due to the snow and ice. After watching three attempts, David Ward popped out in his land rover to help. I don’t know if it was fear generated by the sight of David’s rapid approach which provided the necessary incentive but the car was swung into reverse and he managed to finally make it up to the top.

Dave Tolcher was heading back home so I had a choice of joining Phil and David in Etive or Joe who was planning a trip to photograph from the ‘study’ at Glencoe. I figured it was time to try out a new location so I went with Joe. We travelled down the valley in Alan Sleator’s car (Alan and his friend had joined us for a couple of days). The study is a natural amphitheatre overlooking the Sisters of Glen Coe and it provides an impressive, imposing view. 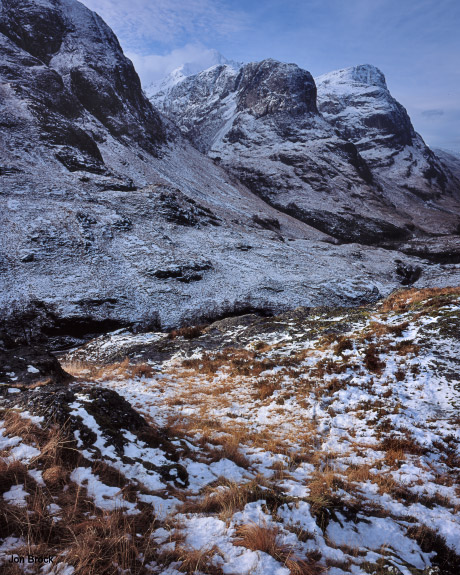 
I setup this image but I was not totally happy, partly due to the balance and partly due to the polka dot nature of the snow. But the light is nice. Not too bad for a first run out there – I will try another image next time I am in the area.

Once we got back to the hotel, the weather started to close in and although I did go out briefly in the afternoon to scout out a couple of interesting areas down Etive we had noticed the previous day, I didn’t get chance to make any more pictures.

For the last day, we decided to all head over to Glen Nevis. I first visited and climbed in Glen Nevis about 10 years ago with my father, shortly before the birth of my first child and hence it is a place that has many memories for me, though I had not been back since. We drove over in Phil’s car and headed for an area of the Glen that Joe knows well.

We split up and headed in different directions. I headed up the side of the valley and after much pottering about made the image at the top of the page. The trees in Etive are fantastic and I loved the quality in the grasses and the contrast with the trees. I am quite pleased with this image.

After grabbing some lunch in Fort William, we headed back to an area of the valley we had noticed as we drove down with some fantastic trees. Joe and Phil headed off into the forest. Possibly because of the images I had made earlier in the week, I was more interested in an area of forest that had recently been felled and was beginning to regenerate. I made the following image that I really like: 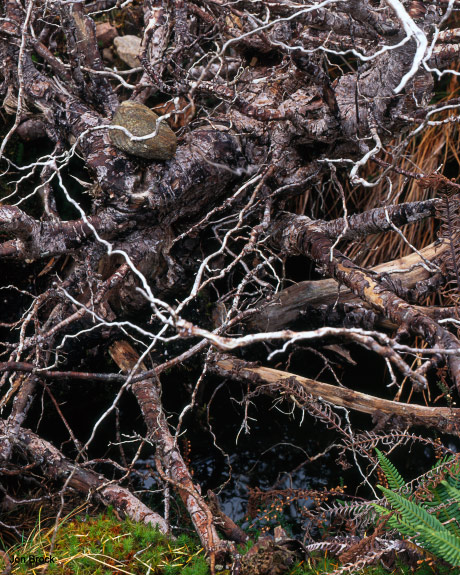 
I particularly like the way the roots revolve around the stone and this is a favourite theme of mine – to take something inherently complex and find a way of taming it; organising the chaos. And that was the end of another wonderful week of photography, with great company and perfect weather.
A very frosty morning in the Wolds
Winter in Glencoe 2010 - Trees and Ice
Next
Previous