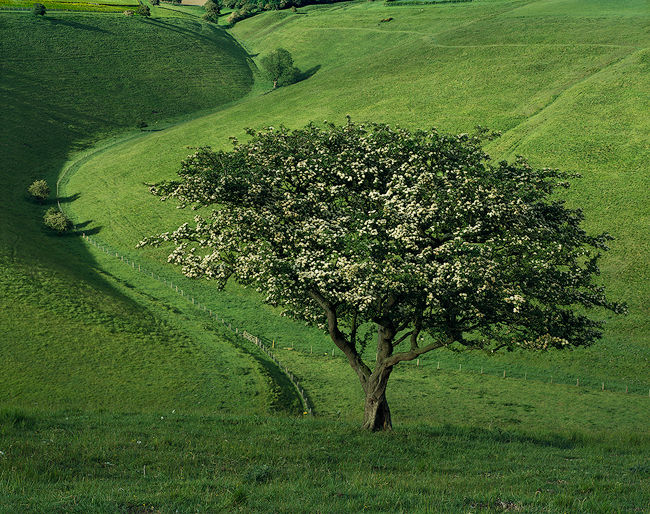 After staying in and watching the second England game of the World Cup last night, I wish I'd followed the path of the first game. England were playing on Saturday night and I was in town late afternoon doing a few errands when I noticed the cloud was starting to break.

Decision time. Football or photography. Making the call, I decided to divert to the Wolds on the way back to visit one of my favourite valleys, Frendal Dale. I climbed up to the top of the valley and setup one of the last remaining flowering hawthorn trees, most of the others having lost their flowers by now.

As usual, the weather wasn't playing ball and that broken cloud was refusing to light up my scene. Then as kickoff approached I got five minutes of light. I made one sheet with the tree in diffuse light, contrasting with the strong light in the valley behind. I waited to make a second image, but the light never quite worked in the same way and after a while it became clear that that would be it for the evening. I packed up returning with ten minutes left of the first half.

A case of having my cake and eating it I think. After England's display last night, I wish I had followed my lead from the first game. I have my eye on a couple of compositions that will have to wait until Sunday night I think.
A perfect Sunday Morning
Elder Man Revisited
Next
Previous