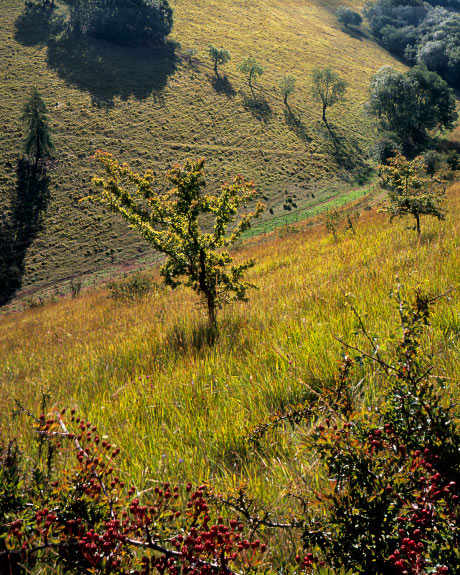 A couple of weeks ago, the weekend after returning from both Holiday and my North Yorkshire sessions, I met up with Paul Moon early on Sunday morning. We planned to scout out Scoar Dale again, Paul having noticed some interesting trees the week before.

Initially we decided to scout out an area I had not visited before which showed promise, particularly for images of nearby Sylvan Dale. I made a couple of trial images and may post them later.

The scouting meant that we were not quite in position early enough for the other end of the dale and the light was already performing when we arrived. Climbing up the side of the dale, I didn't feel particularly ready to make an image so I looked around for a good 40 minutes or so before an idea began to form around one of the interesting hawthorn bushes.

The light was beginning to skirt the opposite side of the valley wonderfully and a idea of using the shadows on the opposite side combined with a hawthorns on this side began to occur to me. After quite a while I finally setup the image at the top and waiting a few minutes for it to light up and for the wind to die down I made the image at the top.

This is one I am particularly pleased with. Thanks to a tip off from Tim Parkin, I have managed to finally get hold of the remaining Paul Wakefield books I have been missing and as a result I have spent a fair amount of time looking at some of his magnificent work that I had not seen before. Putting aside the issues with the repro, the images are wonderfully graphic in style with clear, bold and very deliberate arrangements of the landscape. I suspect a bit of this thinking had rubbed off on my image making that day as I ended up visualising a very graphic circular image. I love the way the implied circle surrounds the lone hawthorn.

I may even revisit this idea/scene when the leaves drop off. Yet another fun Wolds morning.

Addendum:
This is the image I made first off over towards Sylvan Dale. The light was lovely on the other side of the valley. 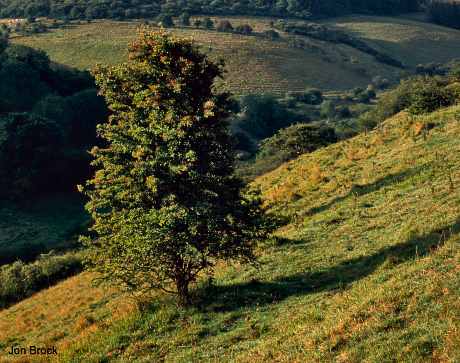