An Autumn weekend in the Lakes 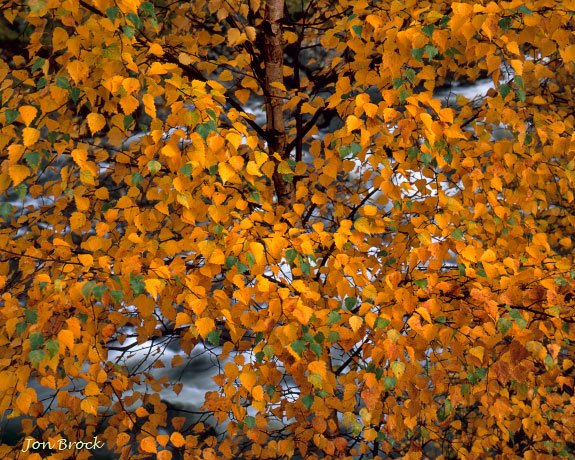 'Autumn in the Lakes'

The pictures arrived on Friday from my trip to the lakes with the old man last weekend. It was a truely magnificient, if very wet few days.

I took the Friday off and my old man arrived about 8am in the morning. After the usual last minute faffing around with packing (I simply can not pack the night before) we headed off to the lakes. It was wet and very windy and, arriving about lunchtime, it was hard to know what to do. I decided that in these conditions, the only place I knew that might be calm was the inside of the Quarry I visited on the light and land advanced large format workshop the year before so I headed for Borrowdale.

Stopping for a cup a tea first in the village, we walked in the drizzle over to the quarry. When we got there, we bumped into a certain JC who was just finishing off a session, having come to a similar conclusion about the conditions and location. He had been working on a project all week and I think was glad to be heading off home for the week. Mine was just beginning.

[ Slightly regretting not doing the ALF workshop this year - it is next week. I hope everyone has a great time. ]

Once Joe had finished, I headed up to the top of the quarry and hunted for an image - comming up with this view - influenced a lot by Julian B's image last year (subconsciously I might add - It just felt the right image when I got up there) 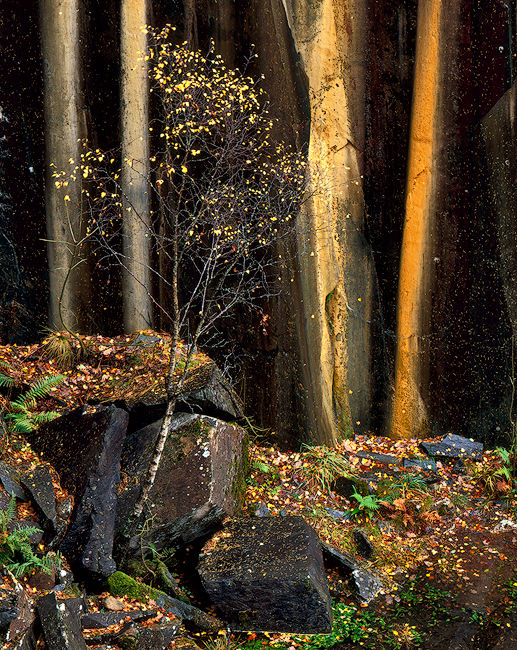 My dad had to hold the umbrella above the camera to keep off the rain whilst I setup on full bellows extension with the 450. Then he had to hold it at the side to shield the camera from the wind. The gods were with me because a few minutes after I had loaded in the sheet holder, the wind, which had been blowing an almight gale, suddently died down for the 5 seconds it took to make the exposure.

I decided that was it and packed up.

We ate our M&S sandwiches and pottered around the woods for most of the rest of the afternoon. Although I made another three images - only one really worked. I had scouted this image with Dave Tolcher the year before and nearly set it up then. I was unsure whether to or not given how windy it was; but that is perhaps a big difference from a year ago - I am much more prepared to take a risk and make the image. 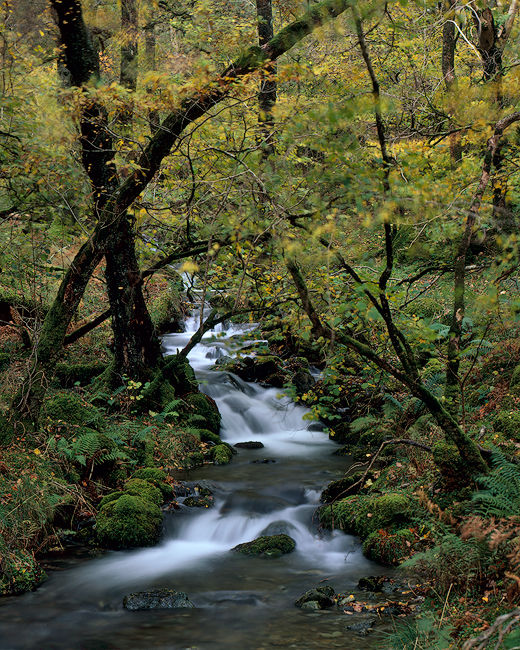 The movement blur in the trees blends well with the water.

On the saturday morning, we awoke to much calmer conditions and the potential for a bit of light. As we had driven over the 66, I had noticed how magnicient the colour over Keswick was, which triggered me to decide to attempt a shot over the town. I remembered the very first hill I took my son Henry up when he was three and we headed for that. Henry spent his entire time on the climb up and down jumping on sheep poo to the cry 'sheep poo - sheep poo'; whilst it was very sweet at the time, it did become a little tiresome :-)

I can report that neither myself or my father repeated this practice and when we made it to the top we were treated to a spectacular light fest. Having no digisnapper with me, I could do very little with the LF kit other than setup the strongest composition I could find and wait.

Wait we did, nearly an hour, which was mighty frustrating I can tell you watching gods rays and light to die for; none of which was in my image. But I knew how I wanted the light and it finally happened: 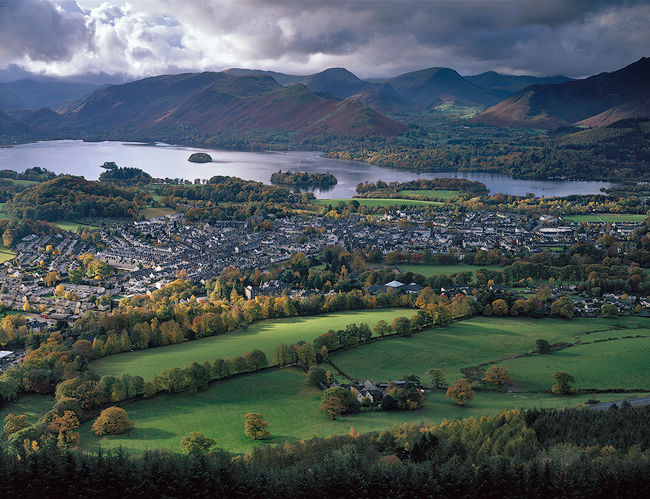 After making the image, we strolled back to the car and considered our next move. I decided that Langstrathdale might be worth a try - completely disregarding the forcast which had said the best conditions would be in the North.

We drove back down borrowdale and headed off up the valley. It was wet and magnificent. I made two images that I'm afraid I will have to post at some point in the future. On both, I experimented pushing velvia to the limits of shadow to see how Tim's drum scanner can cope with retrieving shadow detail. We shall see - I may have taken it too far.

I had remembered my waterproof trousers but stupidly had not taken the brolley so was relying on setting up between the increasingly frequent showers. My camera was getting drenched - but being metal and totally manual it didn't really matter.

The persistence in the rain really paid off and I made the two images of the weekend for me in quick succession. The image at the top and then this one: 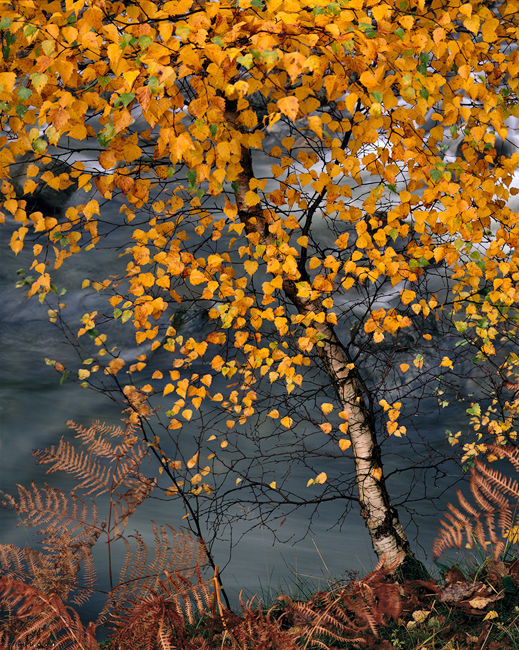 I love both - the trannies simply glow with all that rain.

Beginning to feel rather damp, we headed off back to the village and descended on the pub. I did learn my lesson from the week before and 'totally' drank tea. On the way back, we stopped at a point where I had scouted out an image 18 months earlier with Julian Ashley. The trees were perfect but the lake wasn't. I think next time.

The final sunday was strange. I just didn't feel up for it. We headed to the woods above Ladore falls and although we wandered around quite a bit, my heart just wasn't in making an image. Sometimes that just happens and when it does I think you just go with the flow. I did set one up eventually but I was not convinced and it is still sitting loaded in a film holder in my bag. I think I can tell what I think of it now.

After an excellent lunch in the Ladore Falls hotel, we headed for home having enjoyed a magnificient weekend's photography.
2011 Calandar
Peak District Autumn
Next
Previous