10/09/2011
Last weekend's trip to Sandsend
Last weekend I stayed over in Robin Hoods Bay with Dave Tolcher. We met around lunchtime on the Saturday and immediately headed out to Sandsend for a spot of Large Format photography. We hiked up the cliff to the top and explored the strange quarried landscape - the remains of yet more Alum mining.

The heather had started to go over on the moors but it was still good enough here to make some images. The first was triggered when I notice an exquisite small green plant in amongst the heather. 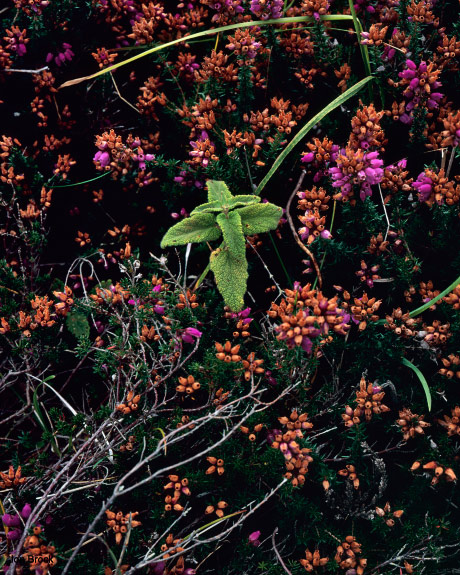 The 120 macro is proving an excellent addition to the bag, despite the challenge to technique in handling it.

I scouted around for some more images triggering a few good ideas for another day. Finally I noticed some interesting brambles set against the heather and I determined to make an image of the red stem and weathered leaves against a background of heather.

The composition, particularly the balance was challenging; I changed my mind about the composition several times before finally settling on the one below. 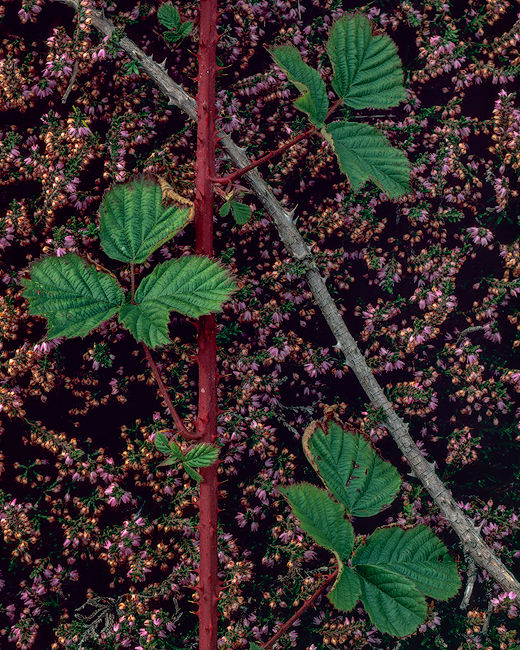 A short burst of rain came through followed by a very subtle gleam of soft sunlight and this lit the stem beautifully, if exacerbating the challenges with the overall balance of the image. For me, balance wise, the image has a slight 'hole' on the right hand side which upsets the balance of the elements above the heather. But what it does do is bring the heather directly into the image as a main element rather than remaining as a backdrop. One of those images I am not really sure of and I will have to think about it some more.

After an truly excellent set of Whitby fish and chips (take note Mr Ashley) we headed over to Saltwick for sunset to try out an image Dave Tolcher had scouted a few weeks back. Lack of light was the main challenge and we ultimately headed back for the obligatory trannie viewing session.

The best that can be said about the sunday morning was that I avoided burning too much film. We decided to try out the groynes at Sandsend for dawn but we did't really get mucg light and I made a mess of a composition. I believe Dave managed much better conditions later in the week.

On the way back I stopped off at Millington for an hour or so to try out the Moon/Brock rusty hawthorn (which is still standing despite Mr M's threats to take an axe to it). I made a fair composition but unaccountably underexposed - so a return visit is definitely needed, assuming it is still there :-)
May Peaks
August Bank Holiday
Next
Previous