20/11/2011
Day three of the recent Autumn trip to the Lakes
Photography is often about moments.

The weather on Friday was set to be set fair, a temperature inversion likely to lead to still clear conditions. It seemed clear that from the forecast this was going to be a day for Vistas.

So taking an early breakfast and forgoing the opportunity for a pre-dawn/dawn shoot (I am not totally convinced by this kind of lighting in the Lakes), we decided to climb up a crag close to Keswick that I new had beautiful views across Derwent over to one of my favourite areas - the Coledale range.

I have walked the Coledale Horseshoe more times than I can remember and at least three times with my father. Such a relationship to a range of mountains creates a focus to one's vistas that transform them from merely capturing a scenics to interpreting a subject.

A magical moment to remember this favourite valley of mine was my inspiration and heavily influenced the two images I made.

The first was made with the 240 lens and I waited for the gleam of light to slide across onto the building on the far side - echoing the shape of the island. 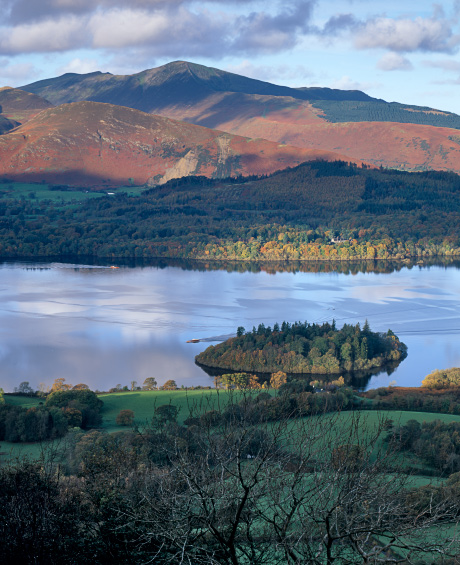 The second was made 40 minutes later as I decided to setup with the 125 and exploit the higher configuration of the light. 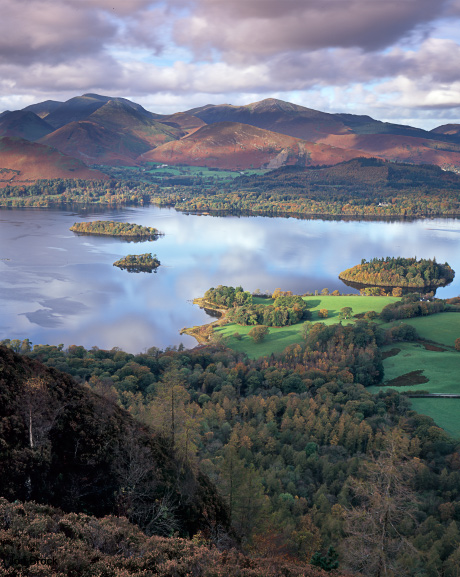 Two very pleasing images but it is the second I much prefer.

We had not seen a sole on one of the busiest walking crags in the lakes and its was so quiet you could hear a pin drop. But just after making the second image, the walkers started to arrive and we decided to head down again.

I had planned to drive over to Grasmere to make some images there but I decided I didn't want to be in too busier a spot so we elected to visit the Patterdale area instead. We had a lovely afternoon pottering around the area and I made a couple more images that I was not all that pleased with - however I found plenty of ideas for a return trip.
Lakes Trip - Final 2 days
The Lakes Day Two
Next
Previous