08/02/2009
A trip to the Lakes in January
A couple of weeks ago I visited the Lake District with Julian Ashley.

Driving over on Friday night, we based ourselves in Keswick and planned to visit some of the places I had scouted out in the trip before Christmas.

For dawn on Saturday we went to Tewet Tarn, which has a superb view of my favourite mountain Blencathra. Despite it being too cloudy to get direct light on the mountain, some of the clouds pinked and it was a pleasure to watch the day start at such a magnificent place. I made a trial image which was useful only in that it suggested I need to try something different if I get good light next time!

After breakfast, we drove over to Buttermere, planning to walk round to Scale Force – an excellent walk around the edge of Crummock Water which I knew from previous visits would have lots of potential for images.

We walked at a steady pace looking at the beautiful trees before I found somewhere I wanted to setup, at a stream pointing down over Crummock Water to Whiteless Pike. A few minutes after I setup, a swan wandered out of Crummock Water and plonked itself in the middle of my picture. Not wishing to argue (I’ve seen an angry swan before), I made the image anyway and employed the clone brush to remove the blurred white blob. 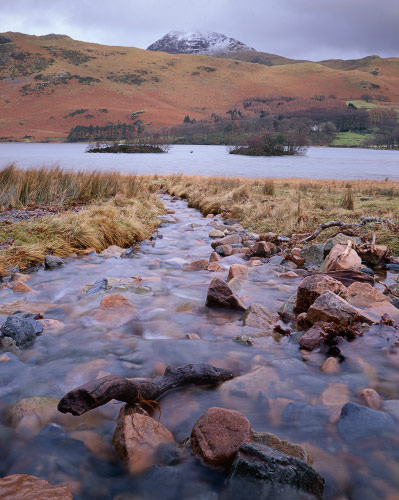 Whilst I like some aspects of the image, all in all a clear case of what David Ward would call subject failure!

Further round, we noticed how dramatic the clouds were getting over Grassmoor and I setup an image that I quite like. We waited for what seemed like ages for a patch of sunlight to work its way along the mountain until it reached exactly the right place. 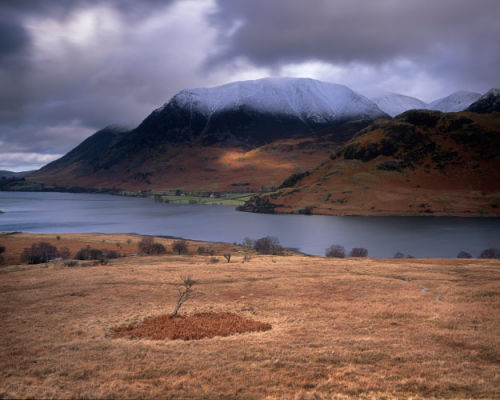 Grasmoor is a mountain I have climbed several times and it has superb views down onto Crummock from its easterly end. One time after walking round the Whiteside ridge with my father, I remember that it was so windy on the top, we could barely stand up and having reached the summit we had to retreat quickly back down the Gasgale Gill valley where it was more sheltered.

We walked round to Scale Force and (after Julian had finished being distracted by an excellent tree stump) arrived at the base of the waterfall. It really is a stunning waterfall. I setup in the stream to make an image of the falls that didn’t really work.

However, half an hour later I found an image in the stream just below the falls that I am very pleased with, which I have titled ‘Scale Beck Slot’. 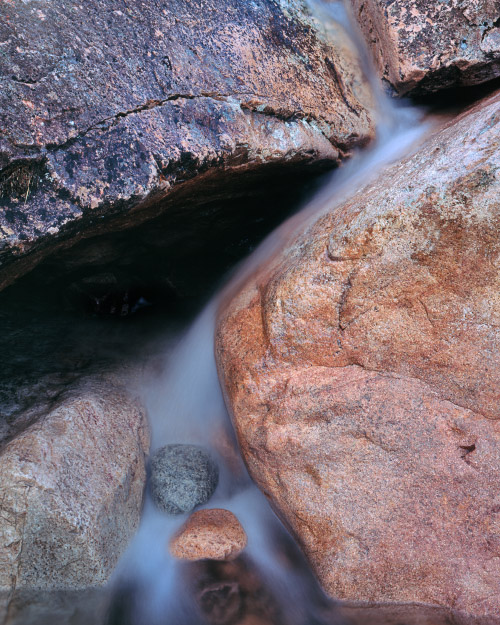 We both had lots of fun looking for images in the stream but eventually we had to start the return journey. When we got back to the stream above Crummock Water, I setup another image I had spotted back down the Buttermere valley towards Fleetwith Pike. I setup in the hope of a little colouring in the clouds at sunset, but unfortunately the clouds were too low to light – the higher clouds above us caught the red sun dramatically but not the lower clouds down the valley.

I made a trial image anyway – something I always do now after I got completely surprised by an image in Glencoe a couple of years ago. If the image doesn’t work I always learn something by examining it carefully later – I can then work out whether a different composition, lighting, time of the year, moment (or even subject!) might be better next time. 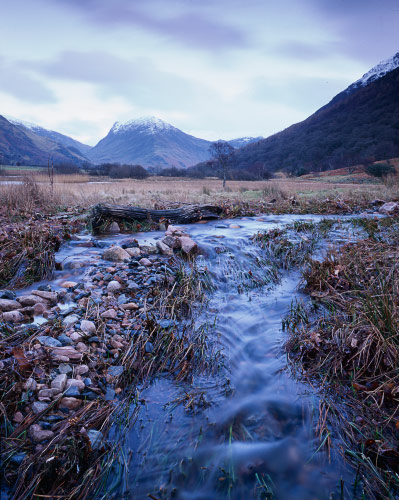 Despite some issues with this particular image (my gradding for starters), I think in better light it has some potential. Yet another 'must make' image stored up for a future trip.

On the Sunday night a front came through bringing wet and windy weather in the morning, so after breakfast (no dawn) we decided to scout Derwent Water. I found some interesting potential compositions in the morning looking over from the Cat Bells side and we had lunch in the excellent Lodore Falls Hotel. Whilst we ate, the sky cleared before our eyes and some magnificent raking light hit Cat Bells just before it swung round too far. I’ll know to be setup besides the lake next time.

After lunch we played in the stream at Ashness Bridge, which has lots of potential not least because during the winter it remains shaded and the mountain side of nearby Bleaberry Fell lights up – lots of potential for reflected light images. I made a couple of images that didn’t really work, including an image shot on Velvia 50 that was rated for Provia 100 – not the first time I have done that recently. I need to be more careful.

For sunset, we drove over to Castlerigg stone circle – my first go at this location at sunset. I was chatting with Dave Tolcher the other day about how difficult a location this is. Neither of us has seen a totally convincing image made of the stones.

The image I made captures some of the atmosphere I wanted, even if I find it a less than ideal composition. 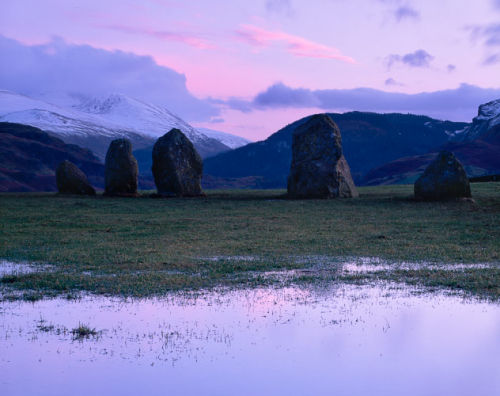 A excellent couple of days. Julian is great company and I hope we get chance for another trip sometime soon.
Glencoe, Day 1
Update from Glencoe
Next
Previous