The weather forecast was completely confusing. We had something I’d not seen before right above us – a spinning occluded front, with the apex centred on Glencoe. None of the forecasts seemed clear about what was to happen for the next few days. In the end we decided to drive over to Loch Leven, for a change more than anything.

I had been conversing with Tim Parkin by email and he mentioned that the forest at Kinlochleven had lots of potential, so we decided to head for that. At least it would be likely to be out of the wind, which was surprisingly strong, and it wouldn’t matter if it was raining.

A short scout of the area quickly revealed lots of potential in the streams and both of us had an excellent few hours finding interesting compositions. I made two images. The first was just upstream from a really interesting little fall that Dave photographed. I was particularly captivated by the shape of my fall and used a 150 standard lens for the first time on the trip. I quite like the fact that the scale is slightly ambiguous until you notice the leaves. 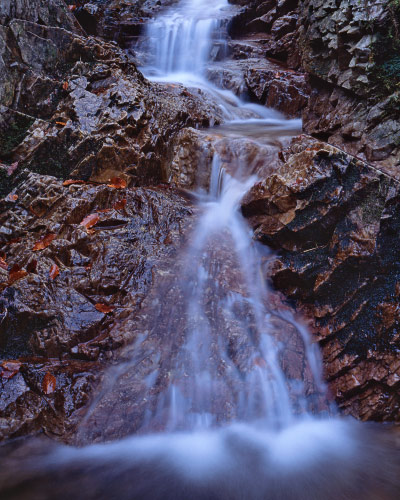 Whilst I was making the image, Dave found some superb red rocks in the water further up the stream which I couldn’t resist. Having seen the shape of Dave’s image on his LCD I noticed he had focused on the water. Knowing how shaded and dark the area was, it was clear I would be unable to hold any real shape or detail in the water on LF (it would need a several second exposure to get sufficient depth of field). So I decided to concentrate the image on one of the rocks. 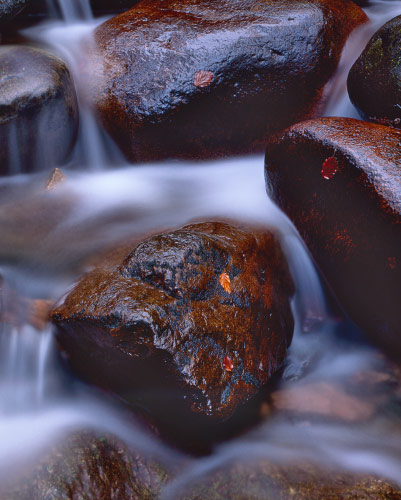 They make an interesting contrast. We walked over to look at the Gray Mares fall and I waded up the stream in my wellies from the path to get a closer look. It is truly a magnificent waterfall. Nearly nine years before I had walked the Mamores ridge rising above the falls with my father - starting from Glen Nevis - one of the most spectacular and enjoyable walks I have done.

However any thoughts of an image this time were soon cast aside as we were at that moment invaded by David and Phil’s L&L group. They had obviously come to the same conclusions as us about the wind. We bid a hasty retreat and drove round the far side of the lake back towards Glen Etive. However, the further down Etive we drove, the windier it got and LF photography would be a non starter.

We went back to the hotel for a cup of tea and spent the last couple of hours of light looking at the streams at the back of the hotel. I was particularly captivated by a number of erratic boulders in the streams, but in the end I ended up finding a composition with a couple of smaller rocks in the stream. 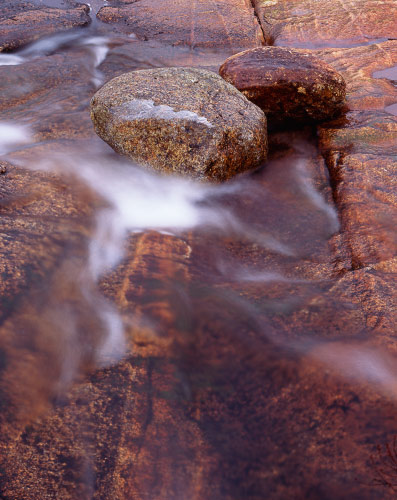 By this stage, the ice that formed in the streams had long gone. If anything it was getting warmer and those text messages from the family about the wintery conditions further south were still coming in. The only crumb of comfort would be a forecast that night that implied the cold front responsible for all the snow which had left Britain heading north might spin round and come back down. ‘Snow flurries’ were forecast over the next couple of days.
Glencoe, Day 4
Glencoe, Day 2
Next
Previous