I awoke on the final day of the trip at 5am to excitement about the potential of finally getting that pink Buc dawn picture. For, looking out of the window, I could see stars.

However my optimism soon turned sour as by 7:00 it was snowing again. A snow shower had gone through at exactly the wrong moment. We headed in to breakfast at 8, slightly despondent. At least the forecast was a day of snow showers with clear skys between.

Sure enough, as soon as we finished breakfast and headed into the lounge, we could see snow shower clearing from the Glencoe Valley. We dashed out to pick up our gear and setup in the car park. I remembered a digi-snap I made a couple of years ago and setup in roughly the same place. The key thing was to wait for the dark trees to be lit. 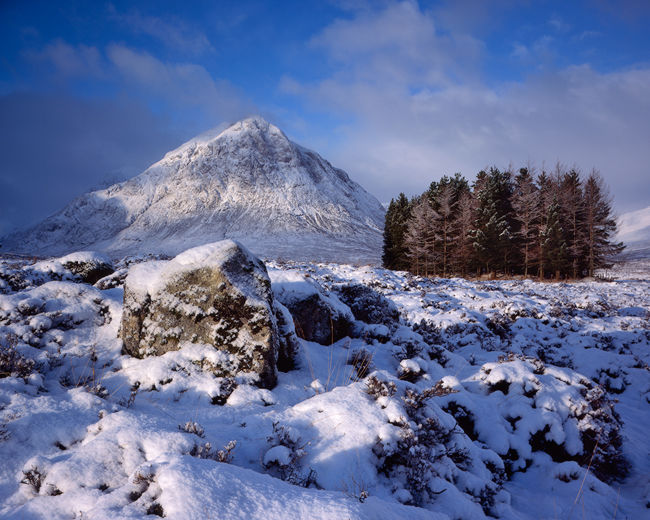 'Buachaille Etive Mor in the morning'

This was the simplest image to make all week because all we had to do was walk 50 yards from the hotel car park, yet somehow it remains the most satisfying image of the whole trip. I think the composition is simple yet effective, the lighting is sublime and somehow as a subject it connects with me – maybe it is because I have seen the view so many times from the hotel lounge window. It would be interesting to know if the emotional response it provoked in me when viewing the image is purely because of my personal memories or whether it speaks to others in the same way.

Whilst Phil Malpas was waiting in the van to transport the L&L crew to their first location, I joked that I had sorted out my Christmas card for next year. To be honest, I’ve probably sorted out the picture that will hang above my fireplace.

We decided that these would also be ideal conditions to shoot the waterfall, so we immediately set off to walk across the moor to the fall. I initially setup a 125, displacing a load of snow over Dave’s camera bag. Sorry :-). However I quickly changed my mind and switched to a 90 to get a wider view of the fastastic foreground.

I decided to try out one of the perspective control experiments I have been making recently and quite deliberately tilted lens and film back in the opposite directions from normal. I particularly wanted to change the relative relationship between the top and bottom of the picture and ‘loom’ the mountain in the background. I shot on colour negative to minimise the impact of light fall off. As a result I have widened the image in the foreground allowing more of the fantastic snow line to be incorporated in the composition. I also managed to move the composition further to the left and still avoid a sign post from the road that was at the top of the picture.

I just managed to catch the moment when the next snowstorm was approaching up the Glencoe valley. 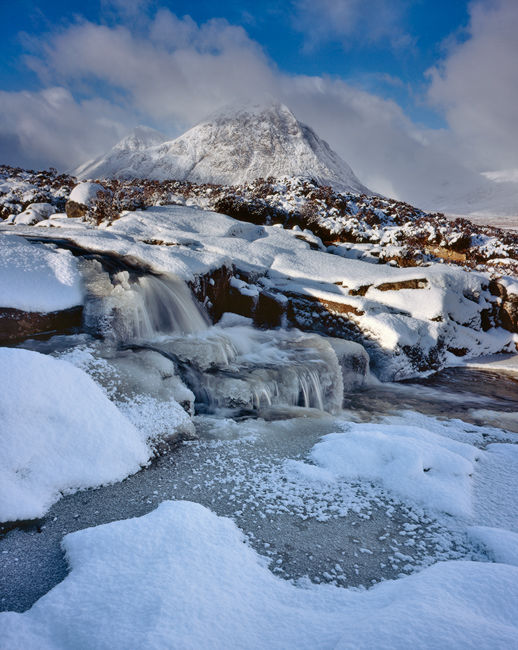 We headed down the Etive valley again to have a look at the area we had found the day before. The conditions were totally different, with much more ice in the river. I had a couple of goes at trying to improve on the compositions of the day before, but whilst they make interesting studies, they lack the character of the previous images. 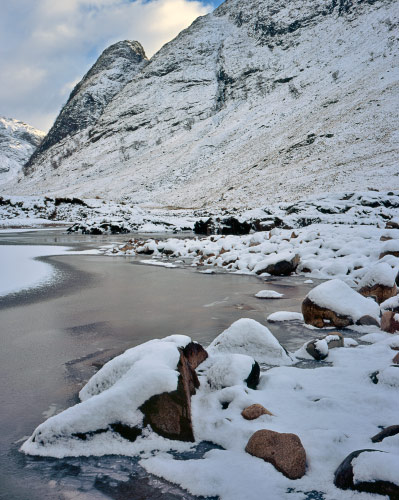 We headed further down the valley aiming for the Robber Falls area. On the way, we saw some superb trees with snow still hanging on the branches. I got out my digital camera and snapped which turned out to be a mistake – one of the reasons I don’t generally carry my D2X around with me is because it causes one to pass making large format images. An image would have been brilliant with a 450 on LF. Ho hum. I live and learn.

Having started to walk over to the falls, it soon became clear that the weather was closing in alarmingly. Also, the snow was very tatty – the earlier snow showers clearly hadn’t penetrated this far down the valley. We retreated back to the car and headed back to the hotel in very heavy snow.

Knowing that this could be the last couple of hours of the trip, I went back out in the snow intending to make an image of the erratic boulders near the stream. I ended up setting up a interesting coloured boulder I had seen a couple of days before. 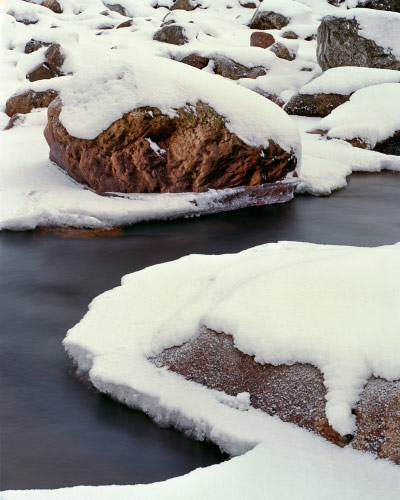 A couple of clouds coloured directly above (it looked like it could have been a good sunset on the top of the moor) and helped to lift the rock a little.

And that was that. The following morning was cloudy again and we set off for home soon after breakfast. We hadn’t managed to get that pink dawn (irritatingly, a quick scan of the Kings House web cam revealed that the next two days had perfect dawns). Nevertheless, it had been a superb trip.
Opening my eyes to the Yorkshire Wolds
Glencoe, Day 5
Next
Previous