14/03/2009
A visit to the Bay
Last weekend I went to stay with Dave Tolcher at the Bay. We spend a great evening dissecting our Glencoe images and plotting our next project.

It was really interesting to compare the images - so many times we were setup within feet of each other but more often than not our images were completely different.

It never ceases to interest me how different the vision of photographers can be - one of the reasons why I never mind returning to the same place or visiting places where other photographers have made strong or iconic images. I think the challenge that this presents is a key part of the attraction.

Anyway, we got up for dawn the next day and walked along the beach to Boggle Hole. It was clear there would be no pre-dawn light but I setup anyway pointing back to the bay. About 20 minutes after sunrise we did get a short burst of 30 seconds of half light and I made an image. However the combination of poor lighting and Velvia (which has made the image rather ugly to my mind) was rather disappointing.

However a short while later I did find a superb log in the river that flows down from Boggle Hole and setup an image. It took me about half an hour to close out on my image and get the balance I was after. However finally I was ready to shoot and then disaster almost struck.

By this time, people were starting to walk their dogs on the beach. One owner had two dogs that were not exactly under full control. One of the dogs bounded and crashed into the tripod (I managed to catch it before the camera fell into the water) and the other dog rummaged in my camera bag and made off with the bag I keep my bellows in. To say I had a complete sense of humour failure would be putting it mildly.

Anyway, despite these tribulations, I managed to setup again and finally got off the following image. 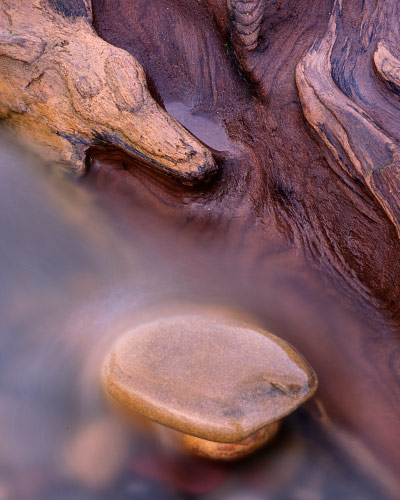 We walked on and had a look at the mud streams I have photographed before, but nothing took my fancy. To be honest, I was no longer in the right frame of mind. So after watching Dave make an image we retreated back down the beach to our favourite RHB cafe for breakfast.
Northumberland trailer
Opening my eyes to the Yorkshire Wolds
Next
Previous