15/12/2008
Analysing an image from Saltwick Bay triggered me to develop and adopt a better technique for making those tricky pre-dawn images
I wanted to pass on a technique I have recently adopted for those very early morning images – that of using staggered ‘hard’ and ‘soft’ graduated filters.

The idea is very simple. Rather than use a single ‘hard’ grad positioned to balance the sky to the foreground, I have taken to using two grads – the ‘hard grad’ positioned in the usual place and a second ‘soft grad’ positioned somewhere between the middle and bottom third of the image.

'Summer Dawn at Saltwick Bay'
Why would I do that? Well I’ve noticed for some time that a large number of my dawn images seem to be slightly underexposed or dark in the foreground. This particularly annoyed me in an image I made at Saltwick over the summer – the result was slightly darker in the foreground than I had visualised. Whilst I am still satisfied with the image, it got me analysing why it was happening and what I could do to improve things.

On reflection, there seemed to be 2 factors at work.

Firstly, the mid ground is often relatively brighter than the foreground. Like many people, I have a tendency to meter off a spot in the mid ground – especially if it has reflections of the sky that it is critical aren’t over exposed (easy to do if the sky has too strong a graduated filter applied). The foreground in such situations, and many others, is simply darker.

Secondly, there is the effect of view camera movements. To focus the camera I often point the camera down and use rear tilt to focus. Indeed I often tilt the back so far that the film plane is at right angles to the ground so as to control perspective. This requires a degree of lens tilt as well to keep the image in focus. The result is to darken the foreground, especially with wider angle lenses, due to both lens light fall off and bellows factor.

To overcome this, I came up with the idea of the second ‘soft’ graduated filter. Here are a couple of examples of where I have applied this technique. The first is an image made at dawn from Robin Hoods Bay, a few miles down the coast from Saltwick. 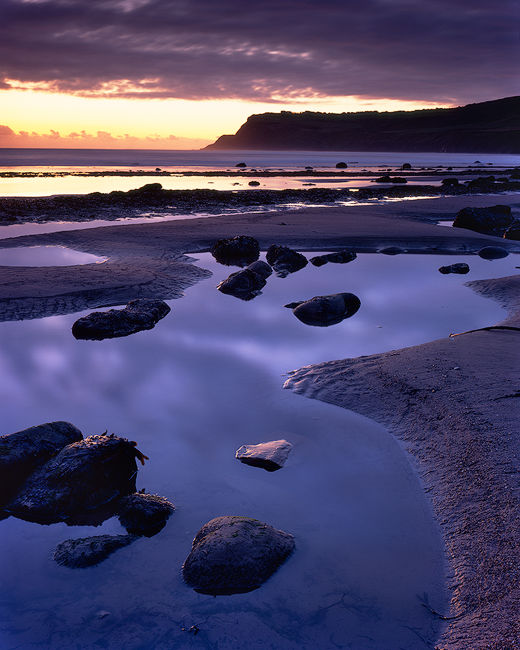 For this image I used two hard graduated filters (a 3 stop and a 1 stop) positioned over the horizon. I then added a 1 stop soft filter positioned where the pools start.

The second image was made at Whitby. 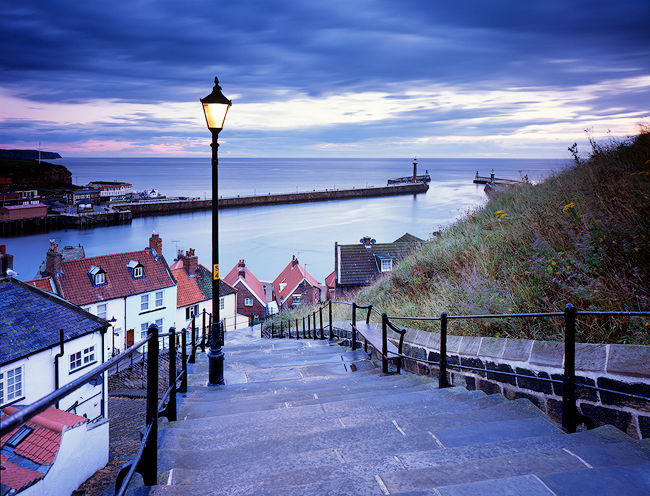 Here, again I needed four stops of graduated filter for the sky to the land. However I also used a 2 stop soft filter positioned around the 40% point to compensate for the degree of light fall off from the combined effect of heavy movements and the relative darkness of the step.

A simple technique, but nevertheless it has made a huge improvement to my dawn images.