In recent months I have been experimenting with the deliberate use of perspective control in my images – one of the key advantages of using a view camera.

Most landscape photographers who have view cameras are familiar with using movements to control the plane of focus in their images – the purpose of this article is to explore the use of deliberate image shape control.

I stumbled across this technique as a result of working on abstract inner landscape images with the combination of my Linhof Technikardan (basically a monorail camera with movements that are only limited by the bellows & lens coverage) and my 240mm Fujinon lens (which has massive coverage, big enough to cover 10x8 – with fairly low levels of light fall off at the edges of the image).

The practical upshot of this was that I started to use the rear standard as an integral part of composing the picture. I could distort/alter the relationship between the elements in the image at the top and bottom of the picture and thus get the balance I desired in the image. I could then focus using the lens (which had no impact on the perspective and a slight impact on the composition that could be recovered by a simple rise or fall movement.)

As I become more aware of using this, I turned to my copy of Stroebel’s ‘View Camera Technique’ (not something I do for light reading normally!). He explains this effect in painful detail on pages 18 & 19, showing a series of example effects on the image on the ground glass screen and pictures of building blocks.

This got me reflecting on how and when this technique could be used in my photography and I pulled together the following set of thoughts.

What is perspective control on a view camera?

The view camera has a myriad of movements that achieves one of two main effects – control of the shape of the image being photographed and control of the plane of sharp focus.

The abilities of the view camera to adjust the film plane have been used for years to control the perspective in a photograph. For example architectural photographers use it to render vertical subject lines parallel, in other words prevent a building from leaning inwards when the camera is pointed upwards. This is achieved by positioning the camera back upright in relation to the object being photographed.

There is an additional affect that seems to occur as a direct consequence of the combination of front and rear axis tilts on the TK. A 10 degree or so front and rear tilt seems to have the effect of slightly widening the effective focal length of the lens at the bottom or top (depending on the direction of the tilt). I got Dave Tolcher to independently verify this and we tried to replicate it on his Arca. The Arca has base tilts and we could not, but we could partially recreate it when we used front axis tilt (the rear standard still had base tilt.). This affect seems to defy the laws of physics and I await Tim Parkin's explanation with interest!? Whatever the reason, the practical upshot is that using the TK I can slightly widen or narrow the top or bottom of the image for compositional purposes if I need to.]

So how can this feature be used in landscape photography and why?

The human brain expects the world to conform to certain rules. For example our buildings generally have multiple upright lines at right angles to the ground. When we know this, regardless of the angle at which we view a subject, our brain over rides our eyes and tells us these lines are parallel.

There is a brilliant section early on in the film Lord of the Rings where the film makers exploit our ‘knowledge’ about the shape of objects to convince us that the actors playing the hobbits are small and the wizard Gandalf is relatively a giant. There is an extra on the DVD showing how this affect was achieved using a number of tricks of perspective.

What do I mean? Well architectural photography (and indeed landscape painting) has a long tradition of rendering buildings in pictures with non converging lines. When we see an image that does not achieve this, many people find this incongruent (particularly view camera users). The same applies to a number of objects we know should be upright and parallel – like pine trees or lamp posts.

If we were to view a picture full of coloured balls (like you get at some children’s play pens), we would expect each ball to be the same size – if the balls at the top of a picture were much bigger than the balls at the bottom of the picture we would think something was wrong. Our brain knows what the rules of the world should be and variation from it is incongruent.

In a world where the absolute rather than relative sizes of objects matter, where parallel lines must be parallel, where shapes are regular, the photographer needs to present an image that conforms to these rules. A building or a reflection needs to be rendered in the way the viewer expects it to look. This is the formal world because the brain of the viewer demands it – challenge the rules and the viewer will ultimately rebel because it is not ‘real’

However, many more landscape images do not need to conform to these formal rules – lets call these images ‘informal’ for want of a better word. When comparing the size of objects, the relative size rather than the absolute size matters. There are no lines that we expect not to converge. Shapes are irregular rather than regular. In these worlds we can bend the rules without making the viewer rebel.

For example, large format landscape photographers have for many years altered the relative balance between the foreground and background of their images by pointing their cameras downwards and focusing their view camera by using rear tilt. This is sometimes described as a ‘looming foreground’ effect but what it really means is the foreground has been magnified so that objects appear relatively bigger, closer and distorted and the background has been shrunk (so that more of it fits in the picture).

This works because we know that that boulder in the foreground is smaller than the mountain at the back/top, despite its size being exaggerated and because its shape is meant to be irregular. The image remains congruent and the effect when used well (i.e. is invisible) helps the photographer to construct the image in a way that is pleasing to the eye.

In ‘informal’ images, some rules can still apply. For example, if we took the perspective effect to an extreme, the boulder would begin to look ridiculous compared to the mountain and the viewer’s brain would rebel.

In an abstract world – one created entirely by the photographer – even these rules and limits may fall by the wayside. Who cares if the squiggle at the top of the image is really twice the size of the curly line at the bottom? The brain has never been trained to know this.

So if the question becomes when to use this control over perspective to create what result, we first need to know if we can. In reality, there is a whole host of limitations.

Firstly, of course, we need to be using a view camera. Tilt/shift lenses don’t control perspective in the same way.

Secondly, it needs to be a view camera that can actually make the movements – many field camera designs have no or ‘camera limited’ movements.

Thirdly, we need a lens with sufficient coverage. This is important because to fully control the perspective (rather than be at the mercy of a perspective effect), we may need to regain the desired plane of focus by employing a front/lens tilt in addition to a rear tilt.

This can have lots of horrible consequences. One result could be tilting so far that there is no lens coverage, hence the need for a lens with large coverage. Alternatively, particularly with wider angle lenses, the image might have light fall off at the edges. The photographer may need to compensate for light fall off through the use of a centre filter or graduated neutral density filter.

Fourthly, controlling perspective like this adds yet another variable to the process of making a view camera image, which is complicated enough. It certainly doesn’t help to keep things simple.

Lets explore some real world scenarios were we might want to employ perspective control:

Firstly the world of ‘formal images’ – images with straight lines that we expect to be upright or reflections that we expect to match the shape and size of an object. Mostly in this type of picture, we need to photograph with a perpendicular film back regardless of how high or low we point the camera. Variation from this approach runs the risk of perceived incongruence from a viewer (unless we want to deliberately create this response in the viewer for some reason, though it beats me why one would in ‘formal’ landscape photography images) 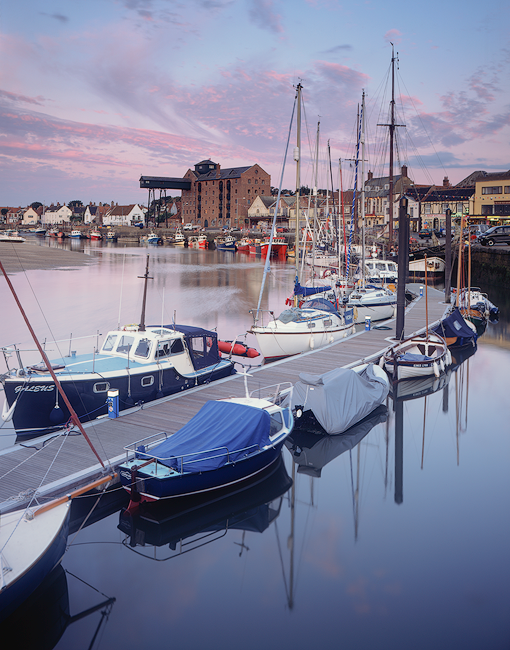 In the world of ‘informal’ images, the use of perspective control is at the discretion of the photographer and can be seen to be tightly bound up with the composition of an image. The frequent scenario of the magnified foreground effect was previously described – and this is a common and effective approach to many vista type images. 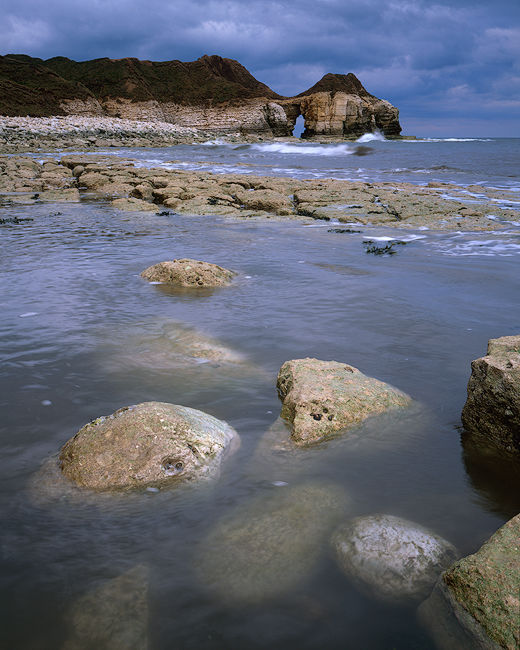 However take the example of a waterfall. Why would we want to make the top of the waterfall look further away and the bottom closer – surely this might unbalance the image? At the very least, we might want to focus with the lens in such situations. But what if we tilted in the opposite direction, assuming we had the lens coverage to regain focus and could compensate for any light fall off? As a result we might get a different (better?) result. 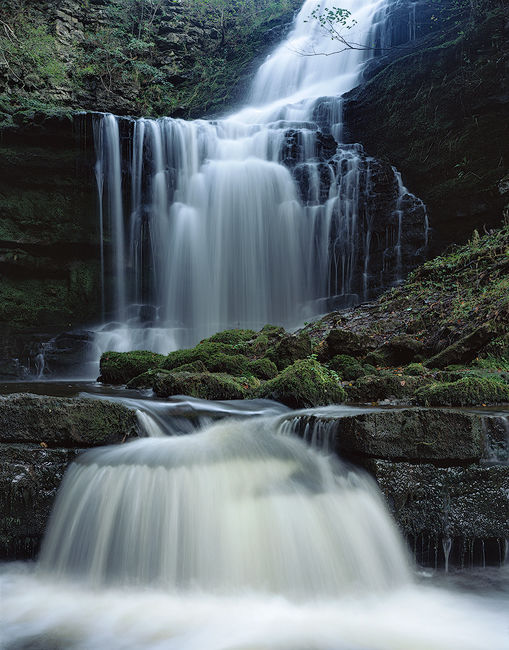 In inner landscape images, we could ignore perspective control or we could choose to use it to help balance the image or interpret the elements in the image in a certain way.

For example here are two images made on the same day were the effect has been applied by tilting the rear standard in opposite directions. 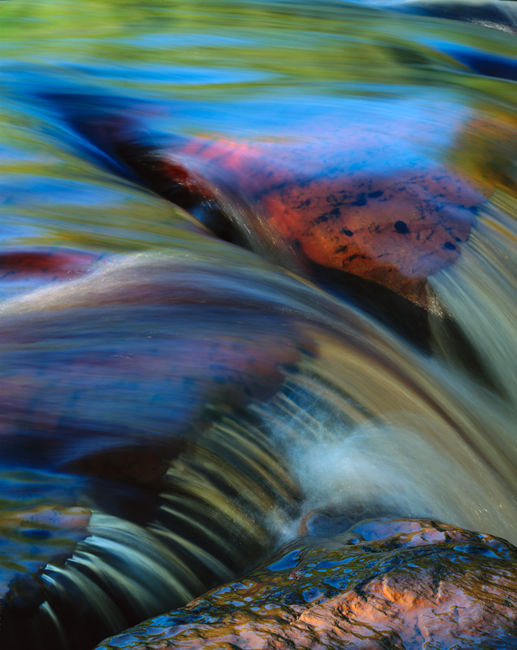 Secondly, an image with the rear standard tilted backwards: 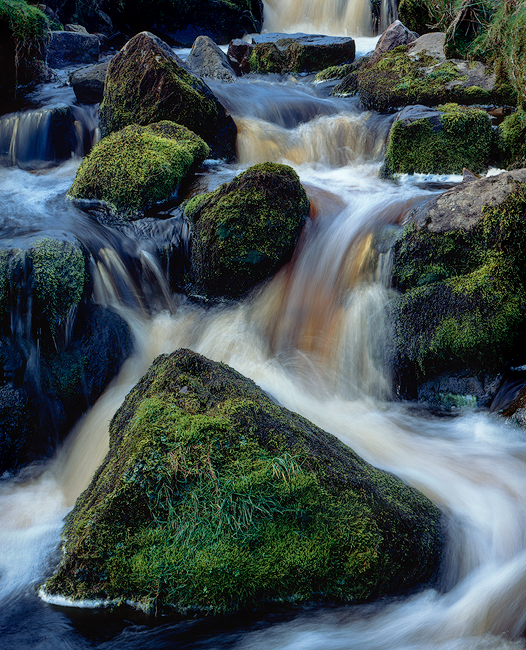 The author Terry Prattchet was recently asked why he had 6 monitors on his work desk. His answer was typically witty: ‘because I can’t fit 8’. View Camera users have the unique ability to control perspective and using it is one of the main advantages over using other camera formats.

My point is not that as a rule we should always apply a set perspective control approach to a set situation. My point is that choosing how to render the perspective is part of the compositional process, not the focussing process. I want perspective control to be a deliberate choice in my picture making whenever it can be, which is why I have started experimenting with its use so frequently, in order to understand the limits and boundaries and identify when to apply the technique to my image making.

And like all techniques, it must be a servant to the creative process not the master. If it is invisible and contributes to creating a compelling image, then it succeeds.

© Jon Brock, 2009
Patterns in the Landscape
Staggered Grads
Next
Previous