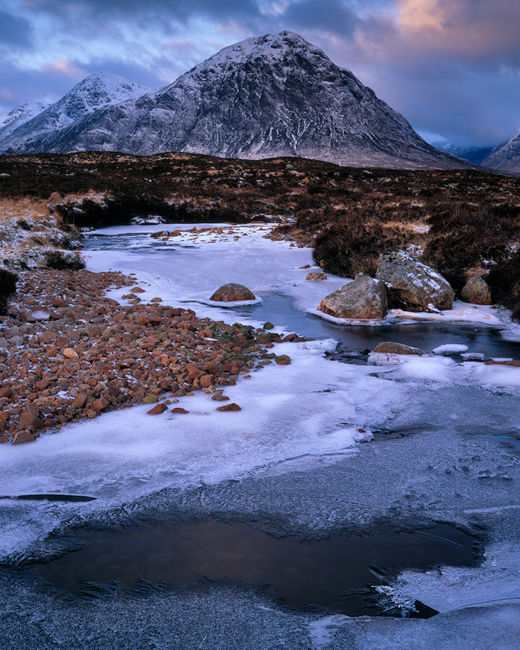 
So yet another photography trip to Glencoe. I've completely lost track of how many nights I have spent at the Kings House over the last few years - but it must be more than 30. As an area to visit, walk and photograph it is surely hard to beat. From the Kings House, four magnificent glens are within easy reach (Etive, Orchy, Coe and Nevis) each with their own unique character. Rannoch Moor is a bit of real wilderness and the mountains are quite special as well with Benn Nevis, the Mamores, Aonach Eagach, the Sisters and Buchaille Etive Mor for example all easily accessible and towering magestically over their respective valleys. It is remarkable that this area is still not a National Park. It is certainly a National treasure.

I've opened this year's account with a fairly standard shot of the Buc. It is the architypal iconic 'mountain shaped' mountain, towering over the entrances to Glen Coe and Glen Etive. You find me once again on day one embarked on a quest to make that iconic 'pink buc' image. It is almost impossible to setup a camera in the vicinity and not point it towards the mountain. As a subject it is almost ridiculously over photographed, though that is no reason to avoid photographing it so long as you recognise that (in David Ward's words) "other subjects are available".

And how they are. One of the reasons I don't tire of coming back to this area is how much depth there is and how much further potential there is to make new images.

On this particular trip I was lucky enough to be joined by Dave Tolcher (my regular photographic partner in crime) and three other fairly handy young photographers: Joe Cornish, Phil Malpas and David Ward. All five of us had a week of personal photography in front of us and it was with a real sense of anticipation that I drove up North on the Saturday morning.

Arriving early afternoon I checked in, grabbed a cup of tea in the lounge and then planned a rendezvous with Dave at a car park on top of the moor (Dave was an hour and a half or so behind me). We turned into the car park at exactly the same moment and ironically Phil and David Ward were already there trying to send an image to a magazine via a wireless card - it is really one of the few spots in the area you can get a fairly decent bandwidth!

We left them to it and headed down to Tulla for sunset. The light turned out to be quite good but unfortunately not for much longer. By the time Dave was setup, the light had almost gone. I hunted around for an image but couldn't really find anything that inspired me. I did briefly setup an image but it wasn't going to work and rather worryingly I had trouble getting my lens on and off the TK - the catch was jamming.

Tulla is one of those magnificent places where I still haven't broken my 'duck'. It is rightly famous for a magnificient image of real genius made many years ago by Paul Wakefield - which remains one of my favourite pictures of all time. It is in his Scotland book, which can still be found if you look hard enough. I'll make an image at Tulla eventually - no need to rush.

Driving back, we come up behind Joe's van as he too arrived from Yorkshire. Following him back towards the hotel, he turned off in typical Cornish fashion to scout out his dawn image just as the light was fading. For us beer beckoned.

After a night of excellent chat, pool and picking over recent pickies, we got up before dawn to see a few stars. The weather forecast for the week was looking good. Dave, Joe and myself headed over to the streams (in Joe's van) and we split up looking for somewhere to setup. Me and Dave found a nice corner of the river but I realised as I setup that it wasn't just a sticking TK I was suffering from. The mechanism had completely jammed. There was no putting a lens on.

Luckily we were within walking distance of the hotel so leaving the tripod in position and Dave watching over my kit, I dashed across the moor back to my room to pick up my spare TK and drove back to the streams. With the light getting up and practically sprinting from the car to my tripod, I slotted the replacement TK on the tripod, put the lens on and focused. Every other mountain around us was lit up magnificently apart from the Buc. However the clouds were lovely and I managed to make an image. (The image at the top of the page). I love the colouring in the rocks on the left and they are lit beautifully. But, no pink Buc. Would I ever get a chance to break my duck? The light looked fantasic on the Moor where I knew Phil would be enjoying himself.

The change of TK was to have a rather annoying and unintended consequence. I have been gradually switching over to cut film holders from Quickload. Quickload holders are sculptured at an angle so that when you push them into the TK back they always go right down to the bottom. I have been used to relying on not being able to push down any further as confirmation the back is in place. As it turns out, a dangerous practice.

Cut film holders are shaped more square and it is possible for them to be pushed down and catch just before the bottom. The holder seems to be secure and in as far as it can go, but it is not sitting on the bottom. The result: a light leak at the top of the picture. Having been so used to QuickLoad, and never having shot a whole lot of sheet film, I subsequently spoke to David Ward and Paula at Linhof and it turns out that this is a common issue and it is advisable to visually check that the holder is sitting at the bottom of the back. Did I realise then? No. Do I know now? Yes. Will I do it again? Definitely Not.

My backup TK seems to catch the holder before the bottom more frequently than the main TK. As a result, it was random whether or not my holder was actually seated properly in the back and 70% of my cut film sheets have a light leak of some description. Argh!

However, all is not lost as I took a number of 'B' images using quickload and a fair number of compositions did survive on sheet film so no real harm done. It could have been much worse. I'm going to write up some notes and post them on 'viewpoints' based on my experiences of switching over to sheet film. Like almost every aspect of using a LF camera, there are mistakes that can be made and lessons to learn. I think I only lost about 30% of the images in the end and one or two of those are better for not seeing the light of day! The best images had 'B' versions shot on quickload anyway. Hey ho.

After breakfast, Dave and I drove into Etive for a day of working the iced streams. Dave made a magnificent picture he had planned the year before using his 80mm whilst I pottered around with details, such as this fun little image: 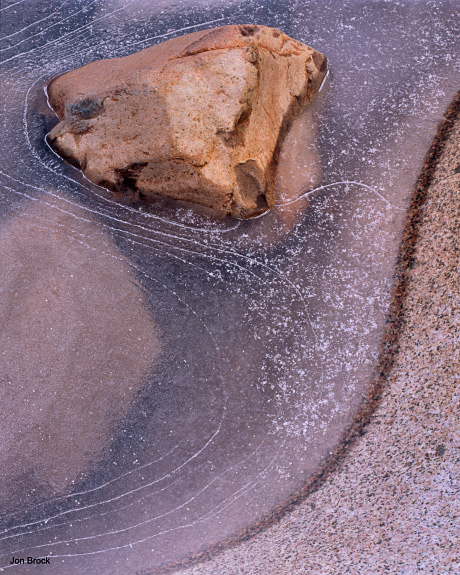 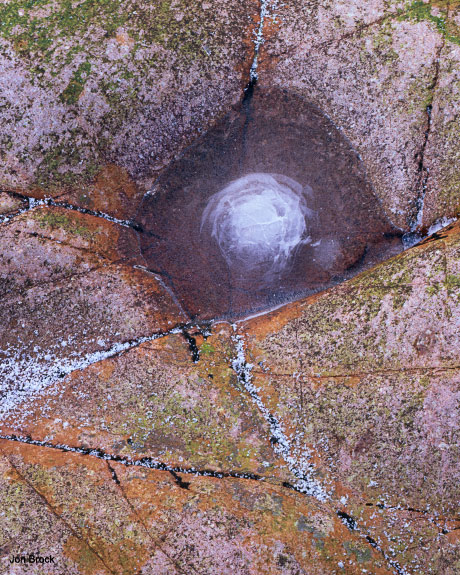 
After driving back to the hotel for a spot of lunch (Cheese Panini, that well known Scottish delicacy), and with the weather closing in from the North, we decided to go and scout out Glen Orchy. We found a magic little dell which was hard to photograph and I made this slightly strange image. I was intrigued by a branch dangling down that looked a bit like a snake. So I composed an image around it. Not really sure why but it was fun nevertheless. 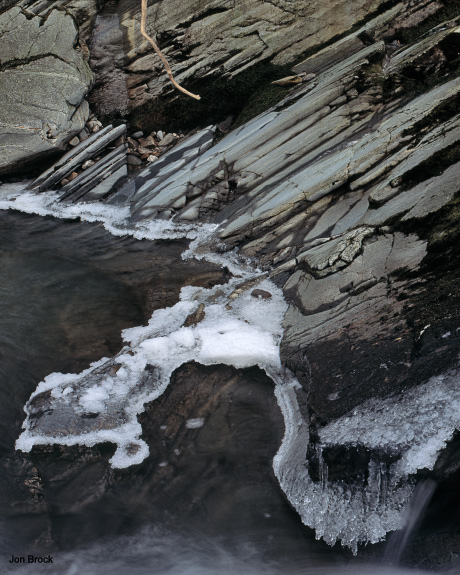 'Dancing around the snake'


It is an unusual image but strangely it is beginning to grow on me. I love the way the image seems to revolve itself around the branch.

We concluded the dell needed no ice in the river to really work. In the fading light we drove further down. I tried out another image over the still water which is quite interesting and probably wouldn't have worked at any other time of day. Orchy is notorious for being challenging with the contrast range. 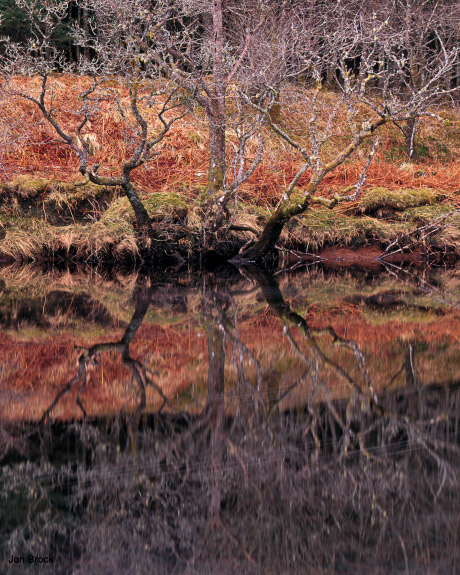 
At sunset, there was plenty of interesting light close by to the south and west, though not really in our valley. After a fairly pointless 2 minute exposure on velvia of a tree and some grasses in the fading dark we drove back to the hotel.
Winter 2010 at Glencoe - Monday and Tuesday
Back from Glencoe
Next
Previous