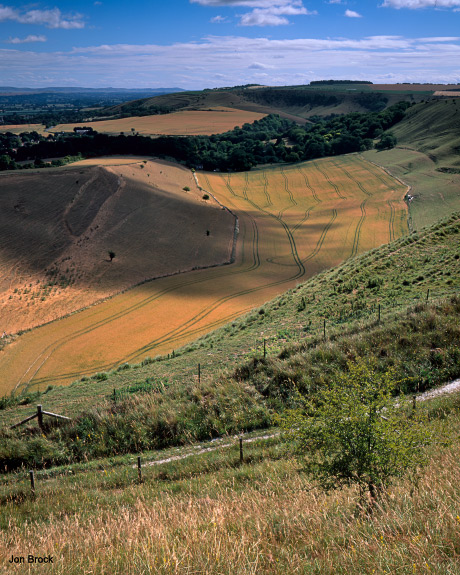 I have spent the last week down south, first at Oxford for a couple of days, then visiting a friend and colleague Ewan Puckle Hobbs at his home in Wiltshire, then working for a couple of days in Winchester, then a day in Farnborough and finally spending a day in Swindon.

Tiring traveling but I did manage to get out for a few hours on the Sunday whilst I was staying with Ewan to make an image.

As Ewan drove us to the pub with his son Freddie so that Freddie could 'test out' beers for his sister's forthcoming wedding, I noticed Bratton Hill fort dominating the local landscape and Ewan drove us up to investigate. A quick scout convinced me to change my plans for the following day (I had meant to drive down to the Jurassic coast). Influenced by the wolds landscape this seemed more interesting to me than pointing my camera at an over photographed arch.

The following morning however was challenging. It was sunny and windy. Finding a composition, I passed a good couple of hours in the sun waiting for clouds to pass over and make the image work.
Fireweed
Tun Dale
Next
Previous