We awoke to heavy cloud and quickly postponed any idea of a dawn image.

After breakfast we decided to go and scout out a waterfall view of the Buc that Phil Malpas had mentioned. Once we found it, we both felt there was clearly potential for an image and we both made a trial exposure. Mine seems to have vanished without trace – it was the only picture that didn’t come back from the processors so either I separated it at some point and it got lost or it was amongst the 3 misfires I got back. No matter, the conditions were not perfect.

We then went to pay homage to 'that tree' - the famous Rannock Moor lone tree. The conditions were fairly similar to those David Ward might have encountered in his famous interpretation so I was determined to try something different.

What struck me seeing it in the flesh was how beautiful, yet bizarre it is. It stands alone, isolated as one of the few objects if not the only object standing up in a complete wilderness. There are miles and miles of empty moorland behind it. I decided to approach the tree from a different angle and positioned myself so that I pointed out towards the wilderness of Rannoch Moor rather than the more conventional view towards the Buc and Glencoe Valley (with the conveniently positioned stream acting as a beautiful leading line).

I then made a second radical decision – I was going to emphasise the sense of space and dominate the image with clouds. I got out the polariser, loaded up a sheet of Provia and waited for the clouds to form into a compelling formation. The result was this image: 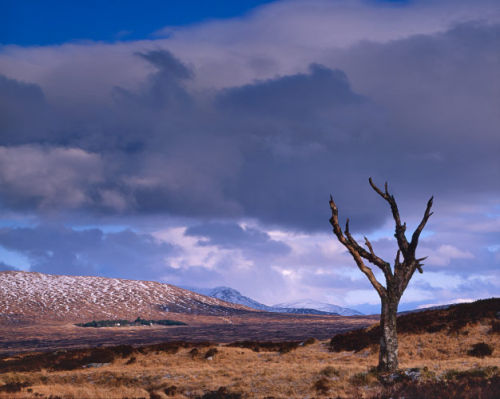 I like the sense of space and isolation I have achieved with this image – and I didn’t have to send apologies to DW. (Though I may have to for later in the week! More on that later.)

We then decided to work Etive valley some more and returned to an area we had scouted the day before. By this stage I began to feel something was wrong. Having relocated the place I made one of my most satisfying images two years ago, I made a dreadful image and followed it up by another that was not great:

I thought the idea was interesting but I spent ages minutely adjusting the composition and was not happy with what I could see – I ended up making a trial image anyway (my practice is to do this now because sometimes I get surprised but mostly because I can then analyse the image in detail when I get home to try and work out what has gone wrong.) The compisition is too forced.

We then went and found some images in the deer enclosure and again I struggled through a waterfall image and a trial exposure of a tree composition that I knew would need better light or different conditions. (I was to get the chance later in the week.) But I was not happy. Checking my meter, I realised I had messed up the exposure on the waterfall image. I was making basic mistakes and something was very wrong.

Talking with Dave, I realised that I was very dehydrated. Having fixed that by a quick trip to the car, I also realised that I had been struggling for a while with my bag – I had borrowed a compact camera from Dave (mine was playing up) and had put it in my bag but it was causing me to put everything else in the bag in unusual places. It is weird, but I have become so used to layout of my camera bag during the image making process that the alien camera was upsetting me!

Having jettisoned the camera, I went down to the waterfall in the deer enclosure and re-made the waterfall image. It is not great a image, but it felt great to make it and that’s all that counts! 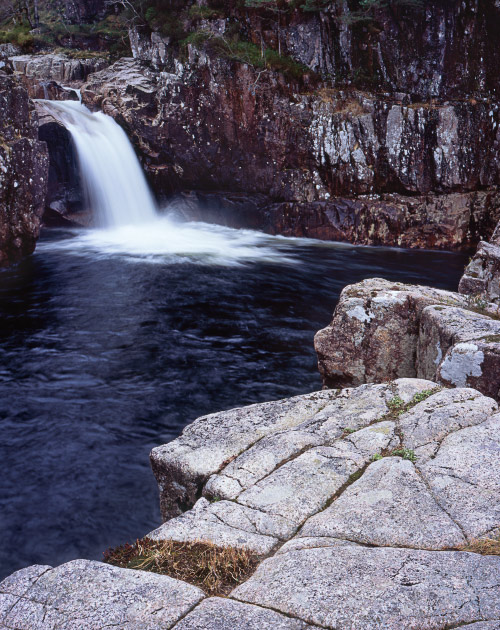 We headed back to the hotel to the news that the rest of the country was knee deep in snow. The snow had missed us completely, though some ice was beginning to form in the streams which gave us hope for Tuesday. And for the next 24 hours we were to endure repeated text messages from family members who were making snowmen and asking why we had travelled so far north not to get winter conditions.
Glencoe, Day 3
Glencoe, Day 1
Next
Previous