Once again there was no light at dawn and after breakfast we decided to head over to the Rannoch Moor tree again. The conditions were completely different from our previous visit, with a thick covering of snow, and I felt justified in setting up something closer to the classic David Ward composition I had previously avoided.

The forecast had shown a front clearing through bringing clearer sky and as we arrived it started to clear. There was an unusual blue light and colouring in the clouds and Provia 100 has managed to capture this quite well. 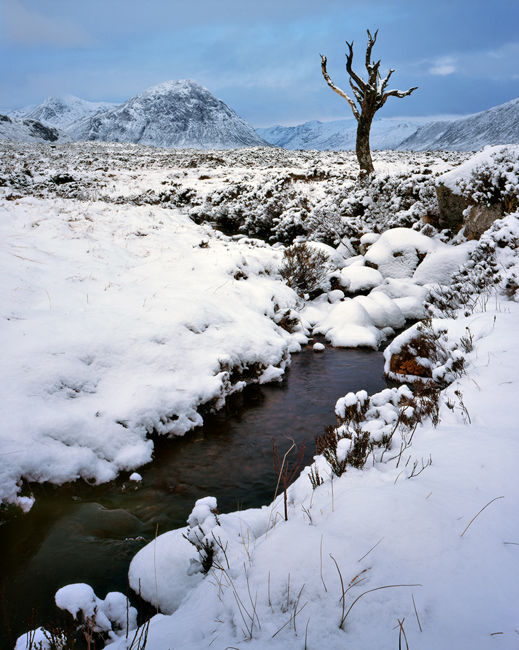 At this stage, I quite like the image. It has a strange quality to the light - it will be interesting to see what I think of it in a few weeks time. That is usually the acid test.

I also setup an image in the stream, much closer to the tree, using my 90 but it turned out to be rather confused.

At this stage I was beginning to get quite worried about my Provia stocks. It was clear that with sunlight arriving, Velvia with its limited dynamic range would not be ideal. Fortunately I also had a good stock of colour negative and for the next couple of days most of my images would be captured on both Provia and colour negative.

We drove down Etive with the idea of looking at the area around Loch Urr, where I had made a satisfactory image two years before. However, we arrived far too early. The conditions were not quite right, with mid day bright light.

Dave looked at setting up close to my boulder and I went down to look at the Loch. Whilst I found a composition that had some potential (it was one I had considered a couple of years before), I think the preponderance of rhododendron bushes that would appear in the image was very unsatisfactory. They have completely taken over the side of the Loch and I don't find them in the least bit attractive.

A little further along, however, we found a spot that had some potential. I tried a digisnap with my D2X and then spotted the potential for an interesting composition that I decided to try on LF. It was clear that an image made on Velvia would not work as there was a massive range of tones from the brightest sunlit snow on the peaks to the dark forest in shadow. It was a toss up between trying a HDR image using digital or trying a sheet of colour negative. I gave the latter a try, not expecting too much. 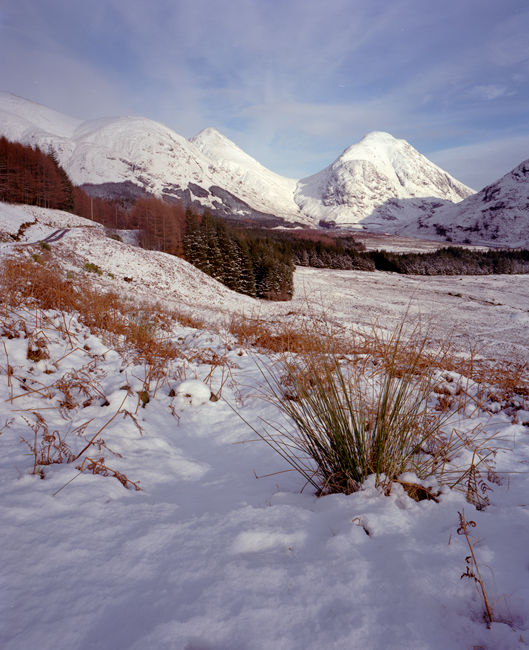 I’m quite surprised and pleased with how this image has come out. This, and in fact all the subsequent colour negative images I made, have a totally different quality to them than the traditional velvia look. What I particularly like in this image is the subtle range of whites that exist from the bright whites of the mountain to the dappled shadows at the front.

We went back to the deer enclosure to take a look at how the river looked in snow - to be honest it was not great. I think the river needs lots of ice to be at its best and snow simply covers up the fantastic range of colours on show.

As I had made a number of 'vista' type images that day, I was beginning to get ‘details’ withdrawal symptoms. There was an image I had made two years ago on my D2X that I had been particularly pleased with and rather annoyed with myself for not having shot on LF.

I had this image in the back of my mind when I set up something fairly similar. However having spent ages setting up, I completely forgot to adjust the exposure for close focusing and the combination of under exposure and blue light from a clear sky made for an image that is a pig to scan - it has an ugly colour cast. I have not managed to get a satisfactory result as yet. If I do, I will append it here.

Whilst we were setup, David and Phil’s group hooted us as they drove past, obviously heading for the Robber Falls lower down the valley. We also intended to head down to the lower valley for sunset and set off shortly afterwards. However we got completely distracted.

An Grianan is a beautifully shaped crag which visibly dominates the valley. Looking down the valley in the line of sight of the river, it has a lovely rounded shape. I have made a couple of trial images of this view from various places along the river and in the right conditions I think it will make a great image.

Seen from further down the valley looking back up, it has an amazing shape. We have seen it many times and commented on how we both wanted to photograph it, but we had never managed to find the right place.

As we were driving past, I happened to look back at the crag and saw an amazing sight – the crag was being reflected in the river. I also noticed some fantastic snow covered rocks. We immediately stopped and parked up to scout the area. It was clear that the area had great potential so we decided to work it for a bit.

The first image was a simple 150 on Provia, making use of those fantastic round stones. 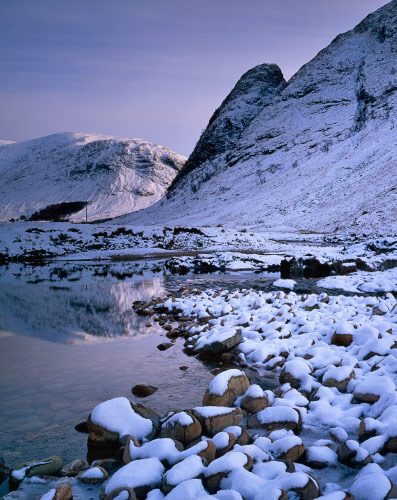 Once we had both made images, we then moved forward and I tried a wider angle image in the river. This was one where colour negative was probably the only way of rending a satisfactory result – graduated filters couldn’t really help. 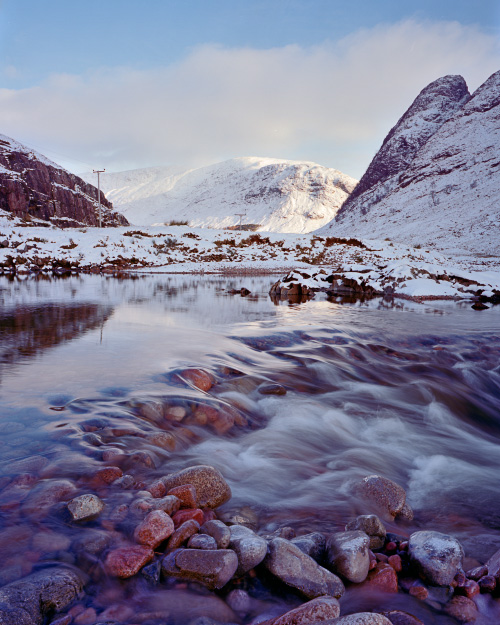 There was also excellent reflected light in the river and I made a fairly hasty image (for me! all things are relative) 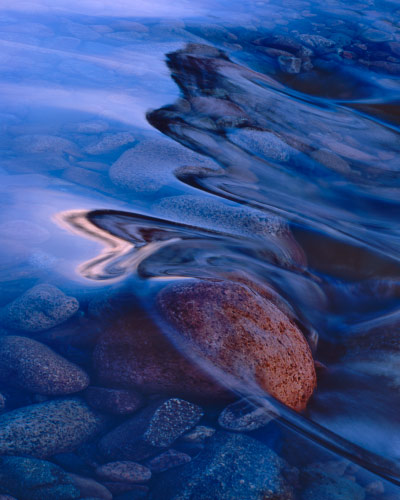 By this stage we were completely out of position for our intended late afternoon session and we had missed the light. However, the sky had completely cleared and conditions were not ideal anyway. We drove down but neither of us felt like setting up anywhere. I stopped and I got out my D2X and had some fun capturing some images using a long lens with VR (shock horror – no tripod).

I noticed the rising moon and made this image. 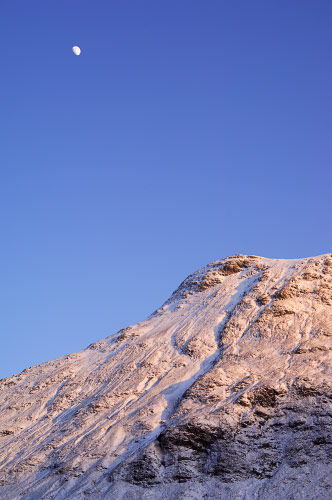 As we drove back to the hotel, we reflected on a day that had not quite gone to plan but nevertheless had ended up being interesting.
Glencoe, Day 6
Glencoe, Day 4
Next
Previous